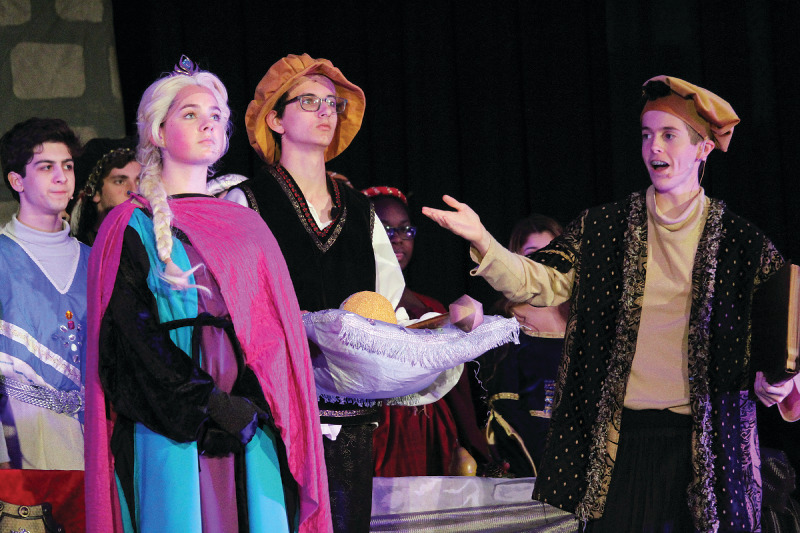 Following the song for “For the First Time in Forever,” juniors Katie Vincent, Matthew VanWert and Parker Shaw perform the coronation scene from Hans Christian Andersen’s “The Snow Queen” Nov. 29 in the St. Mary’s Episcopal Day School auditorium. Vincent played the character of Elsa, VanWert played the narrator and Shaw played the page.

The show was a form of dinner theater which involved audience participation and was decorated seasonally for winter. This was the 24th anniversary of Madrigals, and the Sunday show was sold out to parents and students who attended.

“I decided to participate in Madrigals this year because last year I had so much fun singing and I love chorus and all my friends there,” sophomore Abby Samel said. “My favorite part of being in it was the fun times with all my friends and just being with them all weekend and singing our favorite songs.”

Over 160 chorus students participated, as well some students in the theater program that helped with stage production and technical aspects. A few band and orchestra students were also involved to provide additional music.

“I loved that it was so collaborative with all the different groups in school,” parent Dori Jones said. “It was an amazing performance. I graduated from Plant in 1987 and I still remember the Madrigal performances being there.”

For the Saturday and Sunday matinee, there was a brief intermission during the performance when audience members were able to leave the auditorium and get food – various cakes, cheese, crackers and platters of fruit – which were donated to the show by Barksdale Catering. For the Saturday night show, attendees received dinner while junior varsity girls chorus members served beverages.

“There are a lot of moving parts,” chorus director Bruce Yost said. “It’s a lot of people doing a lot of different things to come together in the end.”

The performance consisted of a production of Hans Christian Andersen’s “The Snow Queen,” which was used by Disney to create the film “Frozen.” The theme for Madrigals rotates every year between four shows, with this being the second appearance of “The Snow Queen.” Next year’s theme is “Shrek.”

“I think the ‘Frozen’ theme translated well into the show,” parent Chuck Ernst said. “I thought the production was really well put together.”

The decorations and set are done mainly by the parents who volunteer to help with the show, along with help from students.

“One of my favorite things is when I walk into the hall for the first time after it’s been totally decorated,” Bruce Yost said. “A lot of times I go in and help build the set, then I take off and all the moms come in and they put all the garland on, all the tinsel, and they put the trees up and get the lights all strung on everything and put the tables out and decorate everything. And then I come back in the next day, and to see that transformation is amazing for me every time. It’s one of my favorite things.”

The different characters in the “Frozen” performance were auditioned for and played by students. Junior Jason Calzon played the role of Olaf the snowman.

“I decided to participate in Madrigals this year because I’ve been in chorus for three years now and I’ve been doing Madrigals since freshman year,” junior Jason Calzon said. “It’s also one of my favorite performance opportunities for chorus because of the holiday spirit it provides.”

The students who participated were from all grade levels, and after the initial performance of “Frozen,” the three choirs and two a cappella groups sang separately.

“I think it brings back everything about Christmas and how involved Plant is with choir,” parent Cruz Dodson said. “My favorite part was when the choir sang in Spanish, the boys. That really touched my heart and I wasn’t expecting that at all.”

The end of the show included audience members and chorus students singing “Silent Night” together.

“Every show ends with a real special, quiet ending,” Bruce Yost said. “We walk out and sing with the audience. It ends so peacefully and quietly, and you know you usually end with something very big and loud that gets everybody jumping up and down, but this leaves everyone thoughtful and gives everyone a very special feeling that goes with the holidays.”