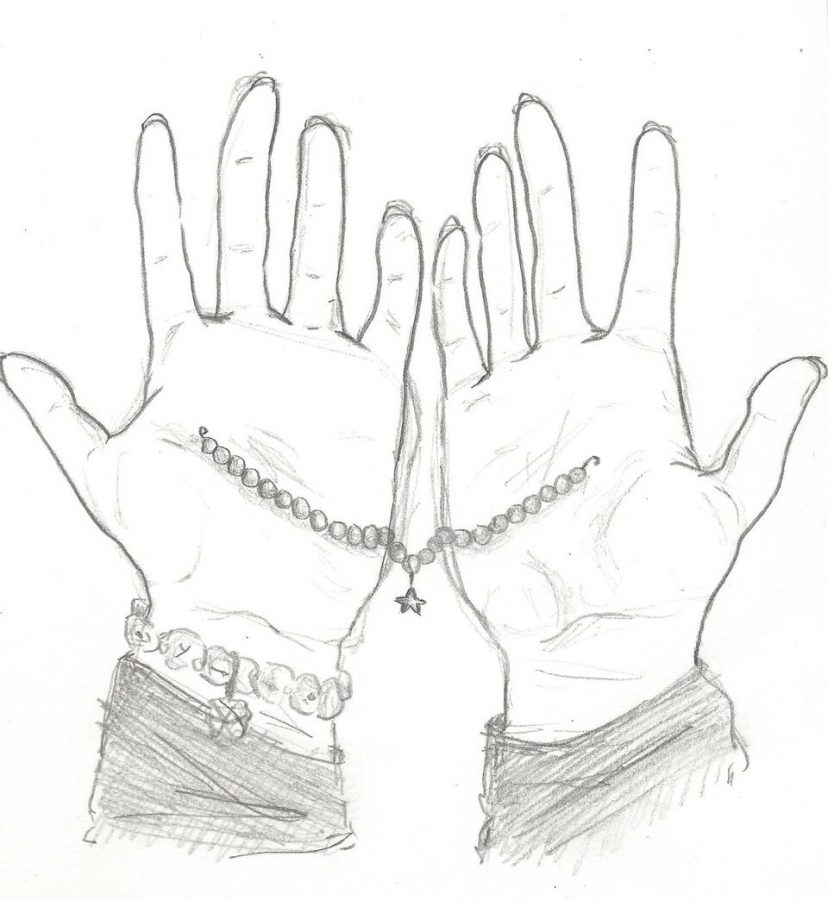 It’s not uncommon for people to find a subtle solace in their large name-brand businesses and the reassurance of seeing a Walmart or a well-known food chain plastered on every block. People like their large-scale corporations; they like the comforting familiarity that comes with knowing the exact contents of every aisle or keeping to a certain few items on a menu. Sometimes though, it’s not uncommon for people to want to stray from that familiarity, to step out of their comfort zones; it’s often desires to expand like this that lead people to strange back-end businesses such as the fortune telling booth.

The fortune telling house opened almost as quickly as it vanished; it seemed to many people that it just moved from city to city, maybe not for any specific reason or maybe for the sake of having an ulterior motive. Regardless, people of all ages, ethnicities and religious backgrounds gathered in trying to make sense of it. Was it a sham? Could they be right about my future? Have horoscopes ever been right, anyways? Who gives a dang if I’m a Gemini? It seemed harmless enough, for the most part; it got people talking, gathered together and tied together people who had maybe never taken a second look at one another. It was harmless enough, until they made the grand mistake of opening in the tiny close-knit southern town that nobody seemed to remember the name of.

Lucia didn’t really consider herself lucky and would hesitate to give a reply had someone asked her if she was. She was rather clumsy, a trait acquired by most girls of her age, and had never won any sort of raffles or contests. She couldn’t hold a relationship to save her life, and after a plethora of closet girlfriends and breakups, would prefer to stay at home than date. Rather than trying to seek consolation for her misgivings in fortune-tellers, she instead settled for the act of telling other people their love-luck; of course, it was all a scam, as most fortune-tellers are. On the other hand, her sister, Chiara, could be considered close enough to the real deal that sometimes it made Lucia’s head spin to think about. She wasn’t quite sure where it came from – maybe an aunt or two down the line, a grandmother or father here and there, or some sort of twisted aligning in the constellations or other mystical garbage – but it was there, alongside the undeniable cliché of the gifted sister and then the other one, which – in case it wasn’t obvious – the latter applied to Lucia. She tried not to be bitter about it. She did love Chiara, really, probably more than most people tend to enjoy the company of their twins; they had great conversations, and Lucia had a lot of respect for Chiara’s can-do attitude. The fact that Chiara had talent and Lucia didn’t just became a sensitive topic at family gatherings.

The village seemed like an okay place to set up shop for a few days in August; the twins had mapped it out along with the other 16 areas they planned on visiting, despite having not a clue of the village’s name. From an outside perspective, it seemed similar enough in many ways to other rural areas they’d been to, and they assumed a possible population of farmers meant people would line up to ask about a bountiful harvest in the fall. Upon their arrival by wagon though, the village was not what it seemed, all eyes seemed to be on the twins, the outsiders, two young girls dressed in all black, who looked too much like each other for it to be a good omen. It was wishful thinking for Lucia to wonder if the stares were of curiosity.

A cold chill ran down Lucia’s spine, her taking a glance at Chiara. Her stomach lurched when she saw that Chiara felt the chill as well and was giving her the same look of unease. Lucia scratched the back of her neck absently, taking a spontaneous interest in looking at the dirt beneath her feet. Anything to avoid their stares. Lucia felt like forcing out a chuckle, felt like publicly explaining hastily that it was all just a scam, fortune-telling isn’t real, your horoscope is fake, we’ll be leaving now but that’d probably land them in deeper trouble anyways, soiling their reputation. Although it wasn’t as if their reputation was very good in the first place.

Chiara and Lucia exchanged frightened looks when seven – or more, maybe, Lucia couldn’t really see – villagers came forward and stormed them, bonding their hands behind their backs after a deliberate and hushed conversation. Lucia couldn’t decipher what had set them off, whether it was the way the twins dressed or perhaps they just didn’t take well to outsiders. Regardless, the sisters were taken to a church at the center of the village, led inside by the seemingly-growing crowd and forced into a dimly-lit room under the rug at the back end of the church.

The days spent in the basement of the church had to be the worst of Lucia’s life. It was understandable, really – who in their right mind would want to be cooped up in a dark room full of young girls pleading against fate? There were about 10 others in the chamber, each seeming to be around the same age, with a couple older or younger outliers that Lucia felt particularly sad for. Lucia talked to them, hesitantly at first, hoping to find an answer as to why they had been sent away so quickly; she discovered that every single girl being held had been accused of being a witch. Something foreign clicked in Lucia’s mind, and she thought to herself that maybe the large sign reading “fortune-tellers” painted on their wagon wasn’t such a grand idea after all.

After possibly three nights – Lucia didn’t know, she didn’t keep track of the days, she preferred to keep track of not losing the warmth of Chiara’s hand – a man that introduced himself to be the Judge started taking girls out of the chamber. Lucia didn’t hear much of their conversations, instead trying to reassure Chiara that none of this was her fault and that they’d escape, but she heard enough to begin to grasp their dire situation. Sometimes girls would come back, sometimes they wouldn’t; if they came back, they’d usually be taken back out in a couple nights or so, maybe several times, and then usually be gone after the fact. Lucia began to wonder when it would be their turn. She grew woefully accustomed to the routine set in place, to taking turns sleeping in shifts with Chiara, to watching the petrified girls be taken, to placing wagers with Chiara on if they’d return or not – accustomed enough so that she wished she were dead when the Judge came back on the 12th night and requested her and Chiara’s presence.

The walk from the chamber to the main chapel was the most nerve-wracking experience of Lucia’s life. She could see out of the corners of her eyes all the villagers, lined up in the pews, staring and judging, and it didn’t help when they had started calling out at the twins once they were in full view. Lucia squeezed her eyes shut, trying to block out the terrible, terrible accusatory yells of the villagers, but it was all too real, and Lucia could feel herself trembling and feel Chiara trembling next to her, and oh God she had no clue how they were going to get out of this. It was all her fault, she realized, for making the idiotic decision in the first place to exploit Chiara’s abilities. Chiara had gone along with it, but that was just so like her, trailing along blindly like a dog following its owner. Chiara always did that: support Lucia’s freaking dumb ideas without considering consequences. Maybe Chiara did consider them, possibly, and just decided to cater to Lucia’s inferiority complex at being the useless twin, instead of the perfect, charismatic, special one. Maybe that was just Lucia’s jealousy, or maybe she was right. Maybe there was no way for them to both get out alive.

The Judge slammed his gavel on the wooden podium at the front of the chapel. The villagers shut their mouths, and Lucia felt her stomach lurch for what seemed to be the millionth time that week.

Out of the corner of her eye, Lucia saw Chiara’s mouth open, then close. A fearful glance to Lucia, and half a beat later, the words came spilling out.

Chiara cried out in surprise at Lucia’s interjected confession, struggling against her bonds to try and get to her sister. Lucia couldn’t bring herself to look at Chiara’s writhing form. Pathetic. The rest of the trial was a blur: the villagers spitting out various lackluster evidence like rabid animals going in for the kill, Chiara screaming out in a frenzy, pleading for Lucia to tell the truth, and the final, predictable verdict. Lucia closed her eyes tightly as they dragged Chiara away. After all, the gallows waited for one of them, and the safety of home the other.

Lucia wasn’t dense enough to wait around to see Chiara be hung. She heard it though: the frantic cheering of the villagers, the hysteric crying, and eventually, dead silence. Soon as her own bonds were released, she got out of the village like the devil was after her. Maybe he was now, after all that Lucia had done. She wouldn’t be real surprised if he was. It was funny, in a twisted way; they had accused Chiara of being possessed by the devil, but Lucia felt the role fit herself a bit more. She’d be lying if she said worry wasn’t eating away at her, alongside the desperation of wanting to go back and help Chiara rather than boxing up their possessions with shaky hands and packing the wagon full. Coward.

All of Chiara’s now-abandoned clothes and jewelry seemed to stick out like a sore thumb as Lucia packed, taunting her with the way they shone under the slit of a moon in the sky. What was she to tell her family? She could always tell them Chiara caught a train to somewhere, left in the middle of the night, left Lucia all her belongings; it’s not as if they would know the wiser. But where would that leave Lucia? Basking in the grief of a prodigy long gone? She couldn’t go home. She wished they had never come to the village. If they hadn’t, Lucia wouldn’t be alone with a large quantity of gemstone jewelry and clothes that weren’t hers but would fit way too perfectly if she were to put them on.

Lucia slipped one of Chiara’s bracelets onto her wrist, wept quietly into the lonely midnight silence, and felt painstakingly bitter about the good luck that she lacked.