Senior draws awareness to the Crisis Center of Tampa Bay 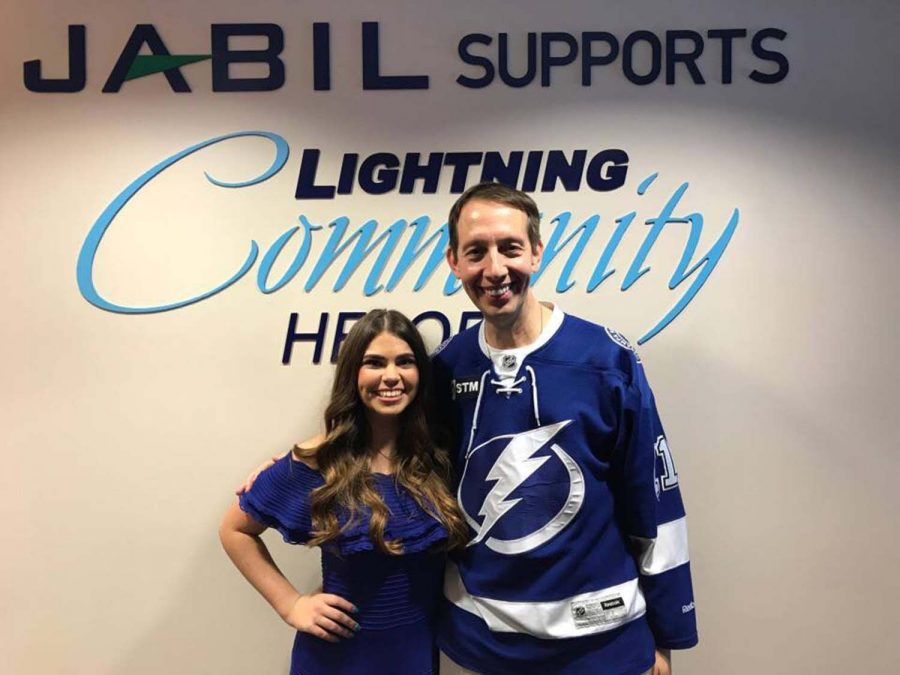 Standing with her pastor, senior Emily Surak receives the Lightning Community Hero award Dec. 8th. Her work with the Crisis Center of Tampa Bay was recognized at the event.

Flashing lights consumed Amelie Arena Dec. 8 along with a standing ovation as senior Emily Surak was granted the Lightning Community Hero award. Surak’s award included a total of $50,000, half of which she will dedicate to the Crisis Center of Tampa Bay and the rest to a scholarship for her college education.

“A spotlight from across the arena was on me, and it was like every single person in the arena turned around to look at me,” Surak said. “I was nervous, but I had the people I loved right next to me cheering me on.”

Surak was joined in the stadium by her pastor Len Plesewski, who went on to honor her at her parish Christ the King Dec. 9, in addition to close friends and family.

“I wanted to invite Father Len because I had a certain number of tickets to give, and I wanted to spread my joy and the experience and the excitement with him,” Surak said.

Surak achieved this honor through her efforts to bring awareness to suicide prevention and her time spent working at and with the Crisis Center of Tampa Bay. This was Surak’s second year applying for the award, and she contributes part of her recognition to the “Be the Voice” event she organized for suicide awareness.

“I just kept working, and I really put my all into that project,” Surak said. “Even after it was over, it’s not like I just stopped working. I kept bringing goodie bags and kept talking to them about spreading their message to other schools.”

For “Be the Voice,” Surak put together a talent show with over 50 student performers. She then donated the earnings to the Crisis Center, an organization which she became involved with after learning the effects of depression and suicide on a friend of hers.

“I’ve had friends since fifth grade that struggled with anxiety and depression and a lot of mental health issues,” Surak said. “One of my best friends a few years ago tried to kill herself a few times, so it’s really close to my heart.”

After learning about her friend and feeling there was something she could’ve done, Surak began to research ways to help. Through her search, Surak was able to find the Crisis Center, which she lends her time to as a volunteer.

“I feel like all my work has paid off,” Surak said. “I’ve just been working so hard for two years straight on trying to get the word out to people, and now that I got that award, now I definitely know so many are hearing about me and how easy it is to call 211 and how simple it is to get someone help or yourself.”

Through Surak’s involvement with school events and bringing her message to the halls, she has managed to earn the support of principal Johnny Bush who also wrote her a letter of recommendation for the Lightning.

“I would say she is very committed to a cause that she believes in,” Bush said. “I would say she is a very determined young lady, and she is a go-getter. She’s not afraid to sing and put herself out there and do good things for the betterment of our school.”