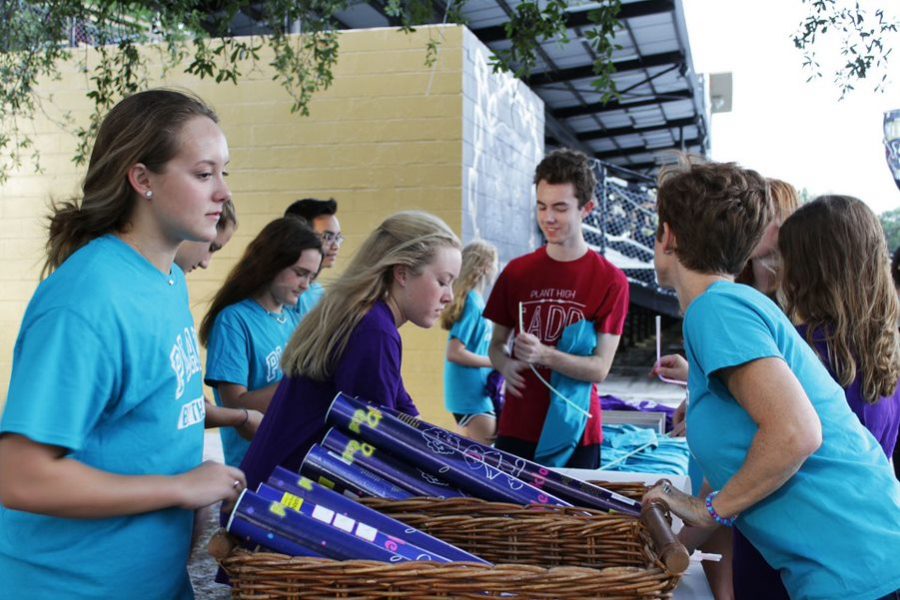 Setting up the table, seniors Lucy Morris and Michael Munkwitz prepare for the Be the Light event, Sept. 20 at Dad’s Stadium. The setup began at 6 p.m. and activities lasted throughout the football game.

SADD, or Students Against Destructive Decisions, is one of the 100+ clubs Plant has to offer. Unlike many recreational clubs, SADD sets out to influence healthy changes in high school culture. The group strives to address topics such as mental health and abuse of drugs or alcohol.

“Originally, the club stood for Students Against Drunk Driving,” club president senior Lucy Morris said. “Then we moved towards more of the general destructive decisions such as substance abuse and mental health and making good decisions that will benefit you.”

Since the start of this year, SADD has thrown Be the Light, an event which took place at a football game on Sept. 21. There, the club members gave out accessories with mental health awareness icons on them.

“I think we spread a lot of light throughout that football game,” freshman Kate Pollard said. “We were passing out ribbons and pins, and a bunch of people really smiled at our table.”

“In this day and age, mental illness has become more apparent in our daily lives,” Gramling said.  “And I think it’s important to pay attention to issues that people may be having and help them out. I think our movement was drawing attention to those issues so that people can get better.”

The club sponsor, English teacher John Deorio, has noticed cub members making the extra effort in addressing these heavy topics. He sees this shift in the club as an important step in the club’s future purpose.

“The recognition of those feelings, ideas, and the fact that it exists in society so prominently is why it’s so important to talk about it and normalize it,” Deorio said.

Some seniors in the club have been participating in the group since their freshman year have seen events and projects performed by SADD through the years. One of these seniors, Kennedy Logan, is a service coordinator for SADD.

“I really like the buttons we gave out, I think they’re cute,” Logan said. “Every once in a while, I’ll see someone that has one on their backpack and stuff, so I think we kind of made a message.”

Facing the rest of the year, SADD has new goals they want to execute and perfect. The SADD club board members have said they are always striving to improve their craft of helping and supporting people in need of help and comfort.

“We have focused on trying to get more of the student members more involved,” Morris said. “In years past, it’s been more of a board-centered club where a lot of the board just does the events by themselves. We’ve worked to get more of the club members involved more so that they can have a greater understanding of our mission and what we want to do in the community”