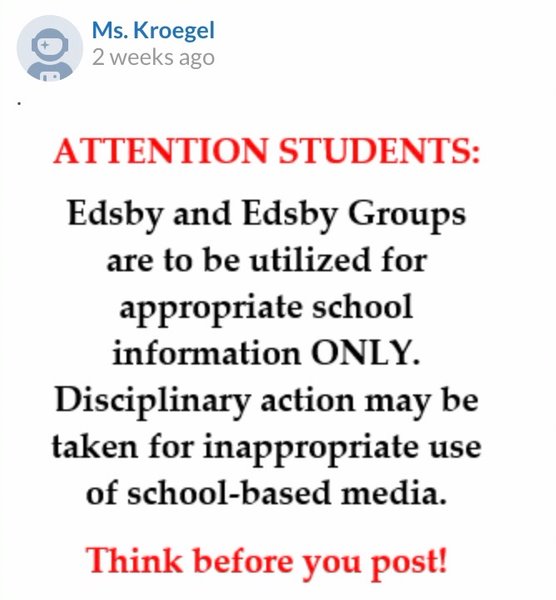 The morning after the meme outbreak, Donna Kroegel notified the senior class that disciplinary action may be taken if a similar incident were to happen again. Krogel aimed to warn the Plant student body to think before they post while using the platform. 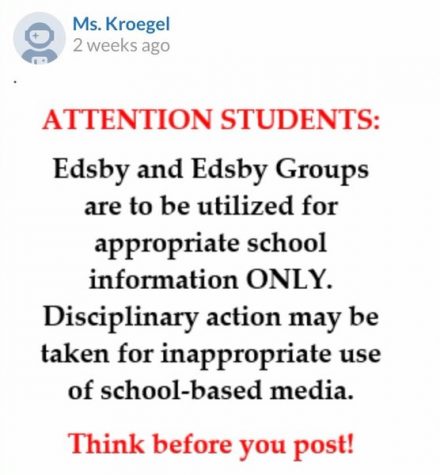 Cole MorganThe morning after the meme outbreak, Donna Kroegel notified the senior class that disciplinary action may be taken if a similar incident were to happen again. Krogel aimed to warn the Plant student body to think before they post while using the platform.

A meme outbreak occurred late at night on Thursday, Sept. 19 within the Class of 2020 group page on Edsby.

Senior Andrea Beaty posted a picture of her hairy legs attached to a poll posing the question: “Should I shave my legs?” in which students were able to select “yes” or “no” to signify their opinion. Andrea quickly attempted to cover up her mistake, by apologizing and saying that she meant to post the poll on Twitter instead.

“I for sure didn’t expect the amount of replies the post got or the fact that over 60 people voted on it,” Beaty said. “I haven’t got in any trouble or had anyone mention it besides students, my mom thought it was funny and I for sure don’t regret it at all.”

The first response came from senior Blaine John, who mocked Andrea for “accidentally” posting the photo of her hairy leg. Shortly after Blaine’s comment, a mass of senior boys expressed their disapproval by forming a comment chain of “clown” emojis. Simultaneously, the number of votes on Andrea’s poll began to skyrocket.

“When I first posted my response, I didn’t think much of it.” John said. “But after I received an abundant amount of texts from my friends, I realized that I might’ve screwed up. That night united the class of 2020.”

At this point, the senior class had adopted the sentiment that school rules no longer applied on Edsby. Some students posted unrelated content. For example, one student used the app to promote their Instagram account and another posted their political opinions. Assistant principal Napoleon Wade had to speak with a few students who participated the following day.

“I wanted to make sure that her mom wasn’t offended,” Wade said. “I then went to Ms. Phillips and asked her if she knew anything about it, and she thought it was funny. She didn’t think any of the responses from the students were inappropriate.”

Towards the end of the night, senior Walker Phillips surveyed the senior class on whether his mom, Constitutional Law teacher Tamara Phillips, should shave her legs or not.

“I understood why it was necessary to talk to me and agreed with everything Mr. Wade had to say,” Phillips said. “Of course, I misused the site, but me bringing my mom into it wasn’t wrong because of her knowledge and agreement to it.”

Many students realized that night that they could potentially face punitive action upon returning to school as a result of their unruliness on the educational platform. The following morning, all posts from the previous night were taken down. Donna Kroegel then uploaded a statement warning against use of Edsby for non-educational purposes.

“Make sure that there’s a censor between your brain and your mouth- and in this case your fingertips.” Kroegel said. “Too many times I think nowadays we lose track of the people on the other side, when people say things before thinking about how that will affect the person they’re talking about.”