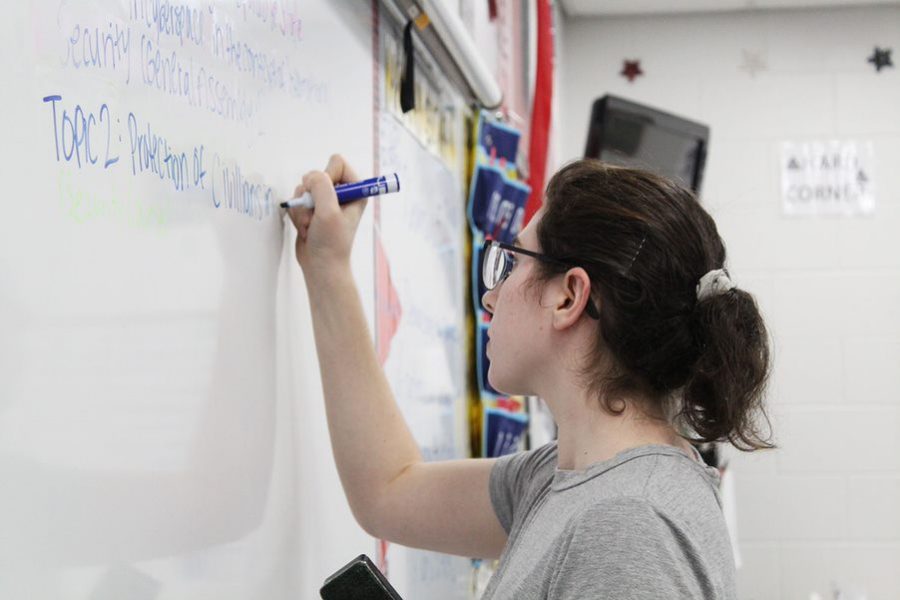 Marker in hand, senior Lauren Ross writes the different topics for the meeting down on the whiteboard. The club discussed politics as well as international policy.

Topics bounce across the classroom as the model United Nations club (MUN) engages in debate, civil discourse and international policy. With mock UN sessions and political discussion as common activities belonging to the club, vice president and junior Reece Aylesworth said she appreciates the different opinions she’s found through MUN.

“I think my favorite thing about it is all the different opinions you have in one room and learning how to have civilized discourse,” Reece said.

The club recently held a mock conference for members to become more comfortable debating and speaking in conference in preparation for an out of school event in March. Club sponsor of three years and social studies teacher Margie Dennie acknowledges the importance of connecting students from different schools through such events as an opportunity to discuss world events.

“I think just the students getting together, talking and discussing issues that makes them conscious of the what’s going on in the world around them,” Dennie said. “It’s really relevant to what’s happening today, and as future leaders they should be appressed to what’s going on.”

Club president and junior Shibani Rana not only organizes and runs club meetings but is also working to secure Plant’s involvement in a conference at USF where members will compete with other high schools in mock UN sessions. Rana said she looks to MUN as an outlet to bring international issues to light in an environment that encourages different opinions.

New member of MUN and freshman Remi Aylesworth has said that so far, she has enjoyed MUN club meetings and looks forward to learning and competing through the club.

“I’m excited because they actually do competitions and it’s not just within the club doing stuff,” Remi said. “So, I think it will be fun.”

Another new member of the club sophomore Harrison Turner said he was surprised at the nonchalant environment of MUN and says the club itself is fun.

“It’s kind of laid back and a little more chill than I thought it would be,” Turner said. “Which, honestly, I’m kind of glad.”

Returning for his second year in the club, senior Jenel Leal has participated in discussions and conversations regarding politics and policy in MUN. Since joining the club, Leal has said he has not only learned current information regarding countries but has also gained new perspectives.

“It’s taught me that there’s a lot of commonalities and differences between different countries, and different perspectives,” Leal said. “It teaches you how to put yourself in someone else’s shoes.”