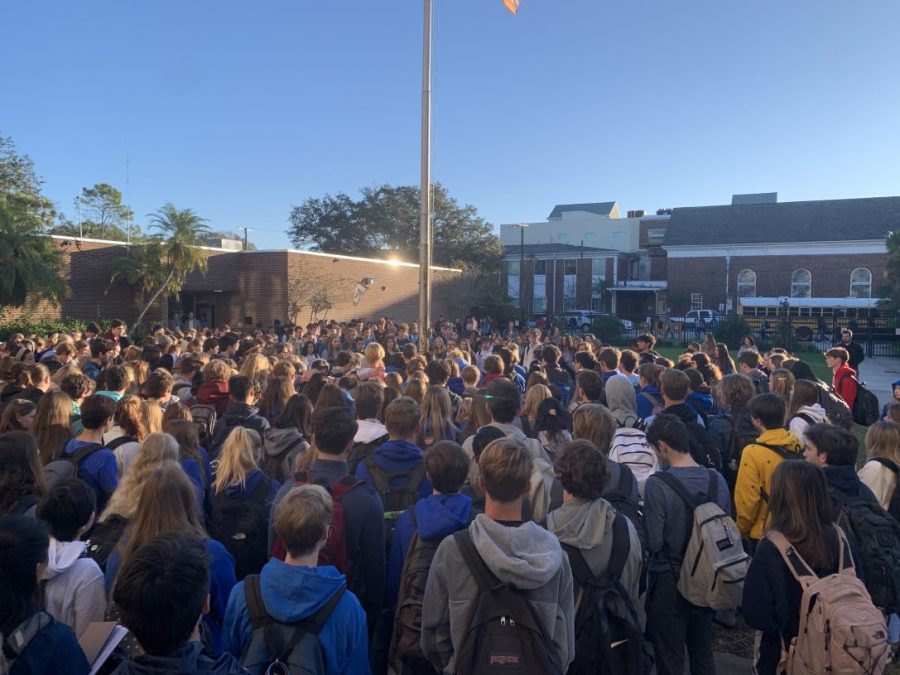 Gathered around the flagpole, students and faculty alike come together in prayer to mourn the loss of Carlos Medina. Medina died Monday, Jan. 20 after being in critical condition following a car accident. Medina was a junior and was on the Plant swim team.

A prayer, organized by First Priority, was held the morning of Tuesday, Jan. 21 at the flagpole in honor of junior Carlos Medina. President senior Christian Germano and board member junior Gabi Frye came up with the idea together.

“We decided to organize this prayer to pray over Carlos, his family, all of his friends and the kids at school,” Frye said. “We wanted to show our support for Carlos and his friends and family during this hard time. We also hoped to shine the light of Jesus into our peers’ lives who are grieving and needed a place to turn to. We wanted to show that Jesus brings healing, especially to the brokenhearted.”

Medina was a part of the swim team and swam outside of school with several of his classmates. Junior Maggie Rowan has been swimming with Medina since she was ten years old.

“Carlos was always someone I could talk to,” Rowan said. “He was probably the most positive person I’ve ever met. His smile and laugh could just light up a room. He had this personality where you would always want to be around him.”

Assistant principal Kimi Hellenburg said that she wants the school to make sure everyone is there for each other and follow the motto, “strength through unity”.

“We want to respect his family and keep them in our prayers,” Hellenburg said. “I think that the students need to appreciate their friends and their family and take it one day at a time. We’ll all get through this together.”