To vote or not to vote

Voting is a necessary step in the United States 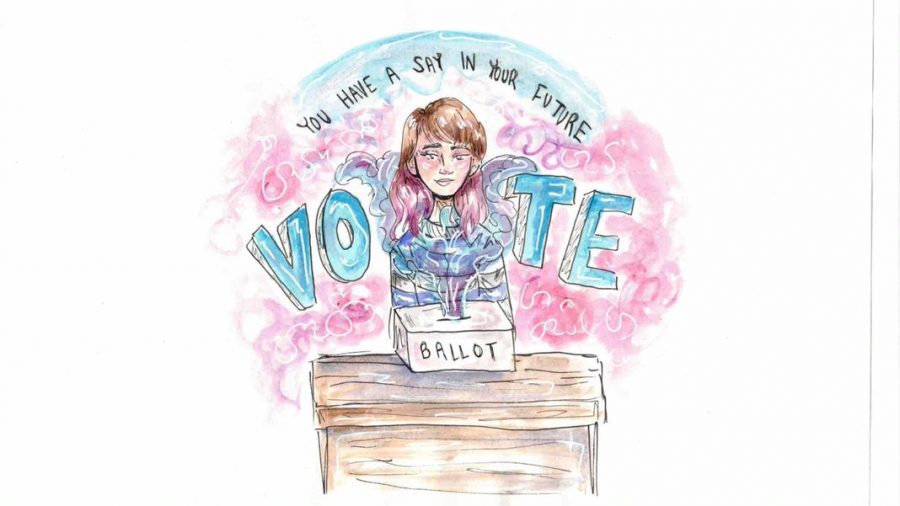 A column by a staffer on why voting is a necessary step in the United States. Artwork by Summer Purks.

As the 2020 presidential election creeps closer, the prospect of voting begins to loom over young people’s heads. Voting for the first time can be a stressful and overwhelming experience. Despite this, it is arguably one of the most important duties for an American citizen to partake in.

Only 46.1% of people aged 18-29 voted in the 2016 election according to census.gov. Entering one of the United States’ most historical elections, it is crucial for that voting number to rise. It is simply unacceptable for over half the population of rising adults to have not voted.

In the context of the 2016 presidential election, the reason the votes between now President Trump and former Democratic candidate Clinton were so close is a simple answer. People didn’t vote. Citizens found Trump’s winning to be impossible. This left the electoral college to decide.

That is completely unacceptable. The purpose of a democracy is for the people to choose how and by whom they’re governed. By leaving the decision up to other elected officials, we are taking our government for granted.

Voting is the easiest way to put our country’s democracy to use. Declining or ignoring this great privilege we have is irresponsible and lazy. Going for a drive to the public library to vote is a short process to better the country.

As a child, I can remember tagging along with my mother as she went to vote and even being able to bubble in what she pointed at. I’m sure that I’m not alone in the memory of how easy and quick the voting process was, even as a young kid.

As we get older, becoming students and young adults, our entire future is before us. We quite literally hold our fate in our hands when we handle the ballots. We can influence how the future happens not only for us, but for generations to come after us.

In addition to the wellbeing of our posterity and ourselves, not voting reflects poorly on past generations. Our forefathers and mothers sacrificed up to their lives for our rights.

Not voting is blatantly disrespectful towards those that fight and die for our freedom, not to mention the founding fathers or the women suffragists. Past people made the right to vote a top priority in their lives, the least we could do is honor that.

Many non–voters will argue that one person’s vote will not make a big enough change in the election process. This is an invalid argument. Logistically thinking about it, if everybody that thought that voted, there would be a tremendous change in the numbers.

In the 1981 Burlington mayoral election, Bernie Sanders won with a margin of 10 votes. This goes to show how important each and every vote is. Just imagine if those 10 people decided their vote didn’t matter. That entire portion of history would be completely different.

If you are of age, it would be your absolute obligation to register and vote. Study the issues, show up and do your civic duty.