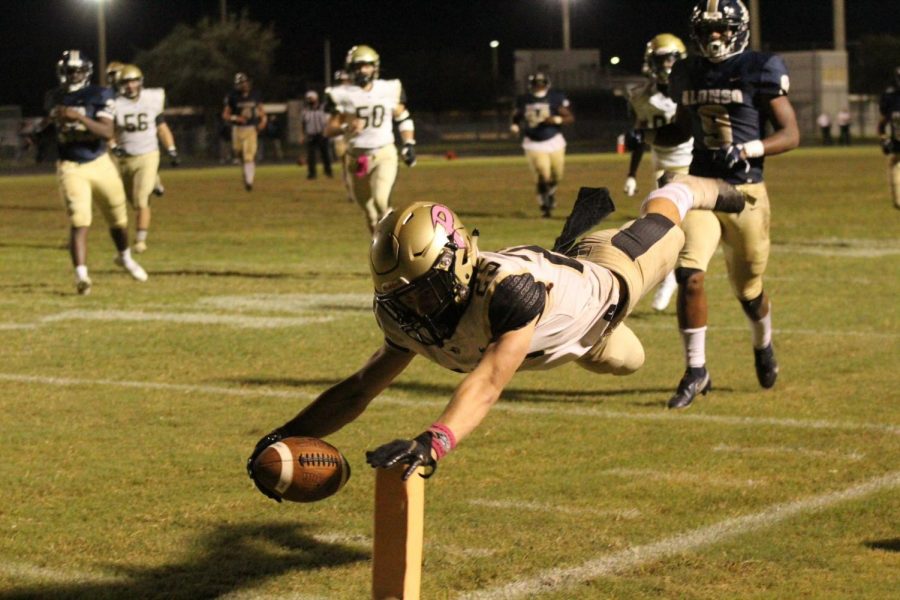 Holding out the ball, junior wide receiver Peter Essad reaches for the end zone. The varsity football team defeated Alonso High School on Friday, Oct. 30 giving them their second win of the season.

As the offense took the field down by one point with two minutes to go in the game, the phrase “make big plays baby” could be heard from the stands as a fan cheered on the team.

“We were thinking about how anything was possible,” junior wide receiver Peter Essad said. “We believed and trusted in each other to make plays.”

On their previous drive the varsity football team had kicked a field goal to go up by six points. They pinned Alonso High School deep, but after the Alonso quarterback handed the ball to the running back, he took it 95 yards for a touchdown. Alonso was up 23-22 after making extra point.

“At that point we knew there was still plenty of time left on the clock,” senior defensive back Christian Maxie said. “Our offense had already shown they could go down the field and score.”

“My favorite moment of the game was probably Dan scrambling out of the pocket and getting the first down run during the final touchdown drive because I don’t think I have ever seen Dan run the ball before,” Maxie said.

“Our energy was very calm,” DeSanto said. “We were not freaking out. We knew we had it. I was thinking that if the ball comes to me it’s money. I knew I had it because I had caught a first down a couple plays before.”

That touchdown and two-point conversion put the varsity football team up by seven points with 28 seconds to go in the game. Alonso got the ball back but fumbled with ten seconds left. Senior defensive lineman Zack Antoniou recovered ball, sealing the game.

“My favorite moment post game was dancing with my coaches and my teammates after we got the win,” DeSanto said.

The big plays made on the last drive allowed the varsity football team to secure their second win of the season improving their record to 2-4. On Friday, Nov. 6 the team will face Lakewood High School at 7:30 p.m. in Dad’s Stadium for their last game of the regular season.

“We are motivated by thinking of those who have played at Plant before us and not wanting to let them down,” Essad said.