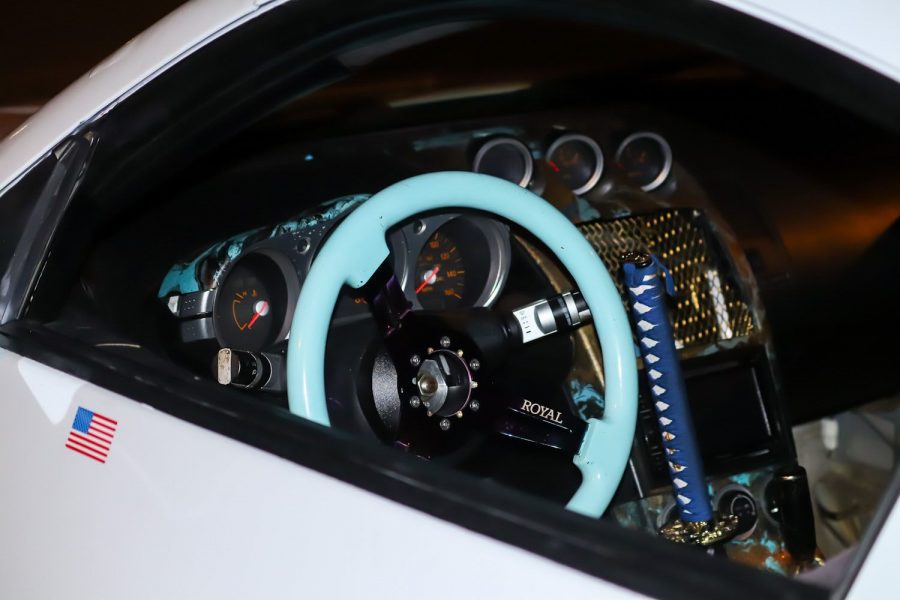 Standing out, this Nissan 350Z shows its own style from inside and out. Car enthusiasts who have shown up to Street Side’s car meets are able to express themselves in the style and look of their car.

Davis Island’s Peter O. Knight Airport has become the hit spot from 7:30 p.m. to 9:30 p.m. for car enthusiasts to get out and see different cars owned by people in the Tampa area. Thanks to seniors Austin Crews, Colton Gross, Noah Halpern, Andrew Levin, Devon Martinez, Lewis Priestly, Zac Ridley, Carter Smith and Luke White, they have made it possible for enthusiasts to get out and show off their own cars.

Based out of Los Angeles, CA., Street Side has managed to expand across the country and into the new hit spot, Tampa, FL. The club has been able to hold meets at Davis Island, the big spot for many car enthusiasts. By every meet, more and more people have shown up as word goes around.

“I moved here from LA where my friends and I started the club back in February,” senior Andrew Levin said. “Ever since I moved here, I was trying to expand the club and get the meets going again. I met some car guys, told them what I had, and they were down to be a part of it. Our first meet had 114 cars which is pretty crazy considering that our first meet in LA had 10.”

The meets have expanded from 114 to around 200 as more and more meets have been scheduled. By far there have only been two meets (starting back on Oct. 10). The seniors and others are expecting a lot from Street Side. They have gotten sponsors and now decals for the seniors who run the club.

“We started with low hopes of maybe 20 people coming to our first meet,” senior Austin Crews said. “We were blown away to see 114 cars show up at what we expected to be a small first meet.”

The meets have been very organized and put together, making it easy for those bringing their own cars. The seniors guide guests to parking spots so it doesn’t get backed up and jammed. Everyone loves a well put together and fun event and Street Side has been able to cover those aspects.

“There were a lot of cool cars and an overall great crowd that showed up,” sophomore Molly Michalowski said. “I met a lot of very nice people and talked to them about their cars. The meet was really put together and overall super fun.”

The hopes are that the meets become big and more word gets around to where more and more come together to see and show off different cars. Street Side’s next meet will be held Nov. 7 from 7:30 p.m. to 9:30 p.m. and there are big hopes that this will be the biggest meet yet.