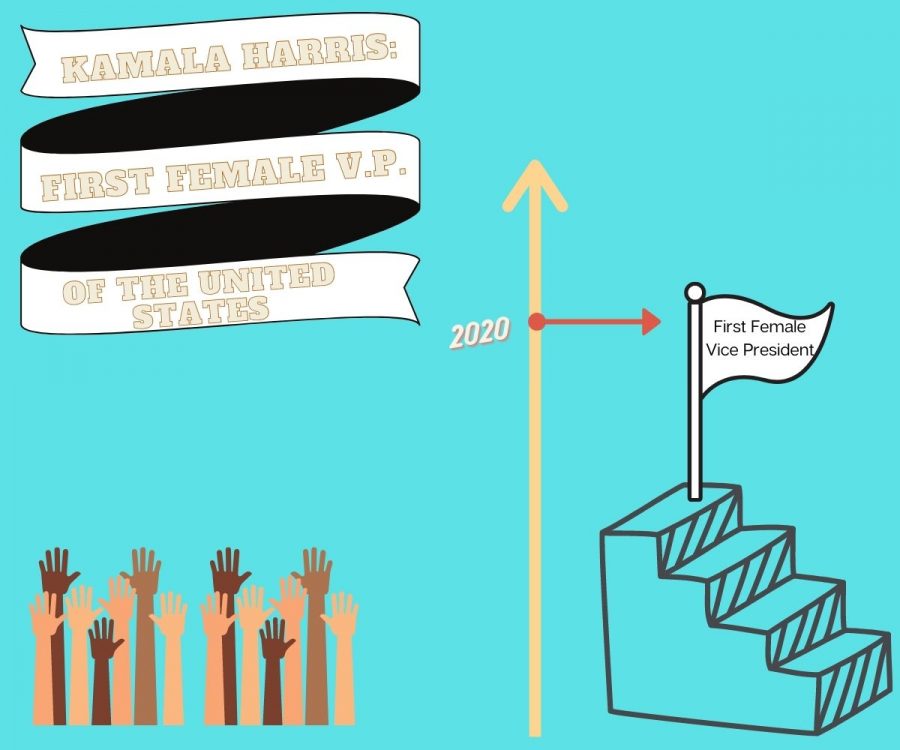 After 48 Vice Presidents of the United States of America, since the office came into existence in 1789, all which being men. The 2020 election has presented occurrences unlike other elections, breaking records, even, especially when our first female and African American Vice President was recently elected: Kamala Harris.

There have been 48 Vice Presidents of the United States of America since the office came into existence in 1789, all of which have been men. The 2020 election has presented occurrences unlike other elections, breaking records, especially when our first female, black and South Asian Vice President was recently elected: Kamala Harris.

Kamala Harris, daughter of Indian and Jamaican immigrants, was born in 1964 in Oakland, CA. Her father taught at Stanford University and her mother was a cancer researcher. Maya, Harris’ younger sister, became a public policy advocate. After gaining interest and engaging in studying economics and political science at Howard University, Harris obtained a law degree at the University of Hastings. Subsequently, she began to embark on a journey to rise through the California legal system and its roots. From 1990 to 1998, worked as a Deputy District Attorney in Oakland. During these years of her occupation, Kamala gained a reputation for rigorousness: she prosecuted cases consisting of drug trafficking, sexual abuse and gang violence. In 2004, was elected the District Attorney and, six years later, she was elected Attorney General of California. She was the first female and African American to hold the position.

Harris delivered an address at the Democratic National Convention in 2012 that which raised both her status and profile. “Here’s what President Obama did: President Obama won Wall Street reform to prevent any more taxpayer-funded bailouts,” Harris said. “President Obama won credit card reform so you don’t get stuck with hidden fees and sudden rate hikes. President Obama stood with me and 48 other attorneys general in taking on the banks and winning $25 billion for struggling homeowners… That’s leadership!” A few years later, she was called upon to run for the United States Senate seat that was being held by soon-to-retire Barbara Boxer.

After Harris declared her candidacy in 2015, her campaign trail began consisting of calling for increasing minimum wage, reforms for criminal justice and immigration and protection of women’s reproductive rights. With ease, Harris won the 2016 election for Senate. This campaign, along with many other factors, led Harris to the victory of Vice President as well as Biden due to the majority of voters wanting these new reforms in U.S. government.

In 2017, Harris was sworn in into the Senate, becoming the second African American woman and first South Asian-American senator. Harris became especially well known for her performance on camera. She served on the Judiciary Committee as well as the Select Committee on Intelligence. Her prosecution style of questioning witnesses defined her in Senate, and she became well known for it. The hearings that went through the Senate aided in cementing Harris’ reputation. Last September in an interview, Harris stated to TIME her interrogations were a direct result of her frustration. “I am new to the United States Congress, and seeing this stuff up close, it’s shocking, the lack of consequence and accountability,” Harris said.

Three years after Harris became a senator, she set forth to seek the Democratic presidential nomination of the 2020 election. Although she had gained popularity for her running, in September of 2019, Harris dropped out of the 2020 presidential election the following Dec. after her campaign popularity decreased. Her national profile in the eyes of many citizens was still at an all-time high, especially after advocating for social-justice reforms post the death of George Floyd earlier this year as well many other racial minorities were who were involved in cases of police brutality. Millions of Democrats in the United Sates began to favor Joe Biden, the Democratic candidate for the 2020 presidential election, in hopes to terminate social injustice in their country. Biden was also called upon by many Democrats to choose an African American woman, Kamala Harris, as his Vice-Presidential running mate. She thus became the first African American woman to be seen on a major party’s national ticket after Biden chose her in August of 2020. Two months later, she became the first woman and racial minority Vice President of the United States.

On Saturday night in Wilmington, Del., Kamala addressed the nation after her victory of Vice President. She begins with a quote from Congressman John Lewis, a civil rights leader serving in the U.S. House of Representatives from 1987 until his death this year, about how democracy is shown and effective through actions, not words. “And when our very Democracy was on the ballot in this election, with the very soul of America at stake, and the world watching, you ushered in a new day for America,” Harris states after she gives thanks to those who aided in campaign work, in poll and ballot counting, and to those who voted. “For four year, you marched, and organized for equality, and justice, for our lives and for our planet. And then, you voted. And you delivered a clear message. You chose hope and unity, decency, science, and yes, truth.” Here, Harris is speaking about the protests against violence of racial minorities and police brutality that stemmed from the murder of George Floyd. She also discusses the coronavirus pandemic, climate change and other issues, and how they are current issues in their country.