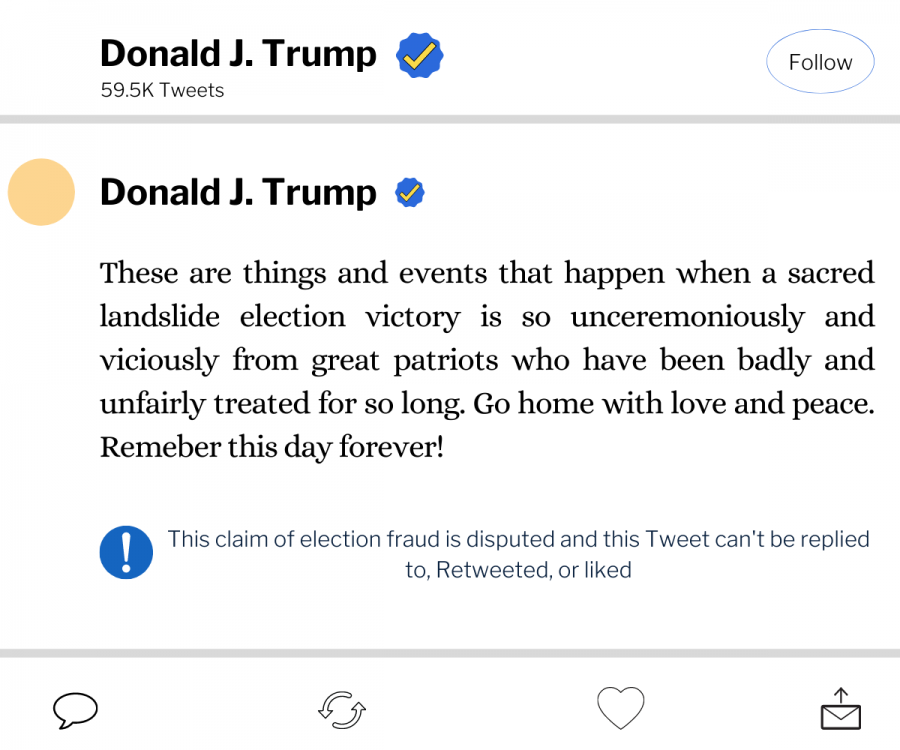 History is made yet again on Jan. 8, when Twitter concurred to permanently suspend President Donald Trump’s Twitter account. This is not the only social media platform that Trump has been suspended from.

For the first time in history on Jan. 8, two days after the Capitol protests, the world woke up to President Donald Trump’s Twitter account being permanently suspended for violating Twitter rules.

“After close review of recent Tweets from the @realDonaldTrump account and the context around them- specifically how they are being received and interpreted on and off Twitter- we have permanently suspended the account due to the risk of further incitement of violence…” a statement by Twitter said. “In the context of horrific events this week, we made it clear on Wednesday that additional violations of the Twitter Rules would potentially result in this very course of action.”

“YouTube is suspending President Donald Trump’s channel for at least one week, and potentially longer, after his channel earned a strike under the platform’s policies, the company said Tuesday evening…” an article by CNN said. “YouTube also removed content from the White House’s channel for violating policy, the company told CNN Business, but the channel itself has not been suspended or been given a strike — just a warning.”

Mark Zuckerberg, co-founder of Facebook, and the Facebook team have decided that Trump’s utilization of their social media page cannot go on due to policies he has violated

“We believe the risks of allowing the President to continue to use our service during this period are simply too great,” Mark Zuckerberg said. “Therefore, we are extending the block we have placed on his Facebook and Instagram accounts indefinitely and for at least the next two weeks until the peaceful transition of power is complete.”

After the acts of violence that were attempted to take place, with Trump firing up his supporters, there is a current discussion of impeaching Donald Trump in fear of him winning a future election.

“The president represents an imminent threat to our constitution, our country and the American people, and he must be removed from office immediately,” Nancy Pelosi, Democratic House Speaker, said. BBC News states, “In December 2019, the House impeached Mr. Trump on charges of abuse of power and obstruction of Congress. But the Senate acquitted him on both charges in February 2020. No U.S. president has ever been impeached twice.”