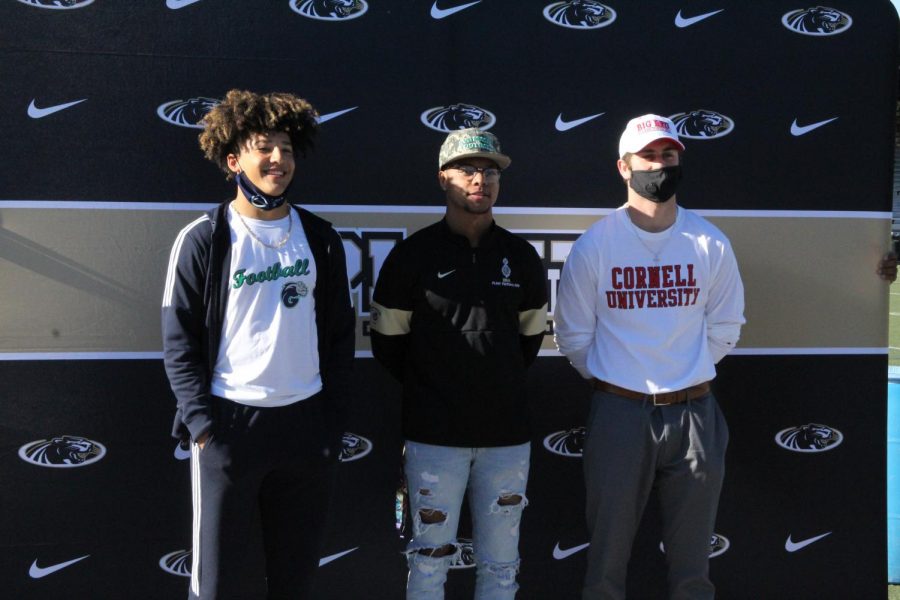 Standing on the track, seniors Ray Desanto, Marquise Jackson, and Brooks Bak smile for a picture. The three seniors signed to continue their football careers at the collegiate level on Nation Signing Day.

As friends and family gathered in the bleachers Wednesday, Feb. 3, three senior football players prepared to share where they will be furthering their academic and athletic careers as they move on from high school.

Going in alphabetical order, senior long snapper Brooks Bak was first to announce that he would be moving to New York to attend Cornell University next fall. Cornell is one of the oldest and most storied football programs in the nation and competes in the National Collegiate Athletic Association Division I Football Championship Subdivision as a member of Ivy League.

“I remember sitting in those stands four years ago seeing my brother talk when he was signing to his school,” Bak said. “I set a goal for myself that I would be here four years later. I couldn’t have done it without my coaches, my family, and my teammates.”

Following Bak, a pair of seniors announced they will be attending Ave Maria University, located in Ave Maria, Florida. Ave Maria University’s varsity teams belong to the National Association of Intercollegiate Athletics Division II level competing primarily in The Sun Conference, but its football team plays as an independent.

Senior wide receiver Ray Desanto had several offers, but ultimately announced he was attending Ave Maria by unzipping his jacket to reveal an Ave Maria shirt.

“My mom always told me that it takes a village to raise a child, and I have had an amazing village here at Plant High School,” Desanto said.

Desanto first thanked his coaches and teammates for making him the best version of himself, but then took a moment to recognize his number one supporter.

“I want to give a huge shout to my mom,” Desanto said. “My mother is the reason I am here today. She plays both a father and a mother role in my life. When I did not make the team freshman year, she brought me up, got me trainers, and had me lifting weights. She helped me build my esteem and make me more confident than ever.”

The final senior to speak was defensive back Marquise Jackson. After thanking those who have helped him so far on his football journey, he placed an Ave Maria hat on his head to announce he will be continuing his journey there.