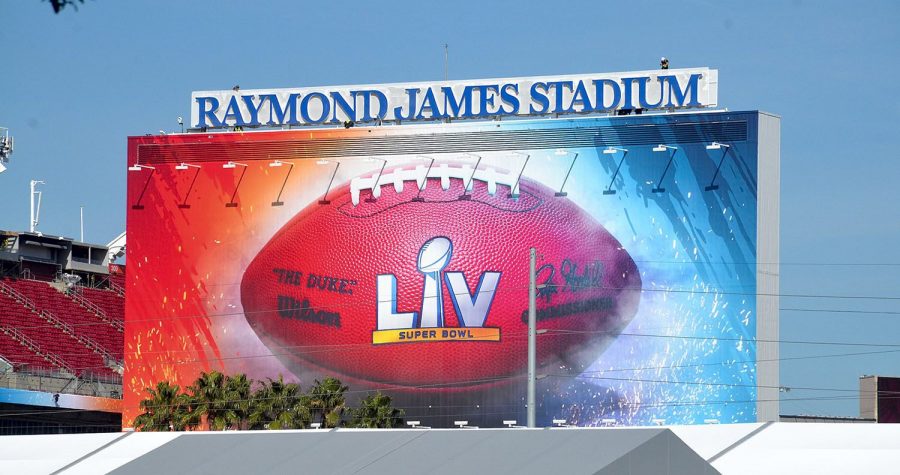 The Buccaneers are the first team in history to play and win a Super Bowl in their home stadium.

Welcome to Super Bowl LV, the first time in NFL history that a home team hosted and played in the Super Bowl. We will be watching the Buccaneer’s playoff against the Chiefs to see who will take home the championship.

With the first half of the first quarter gone, the Tampa Bay Buccaneers have had two possessions and the Chiefs are on their second possession, with no scores for either to show. Patrick Mahomes has shown his true skill by getting a first down after not finding an open receiver. In the start, Tampa is seeming to struggle preventing any first downs, but they still manage to stop them from earning points. With five minutes left in the first, the Chiefs managed to make the first score of the game with a field goal, making it 3-0, Kansas City. With 0:30 seconds left in the first, the Bucs make an amazing touchdown, making it 7-3, Tampa Bay. This brings the final score of the first quarter in favor of the Bucs as we move into the second.

In the second quarter, about three minutes in, Tampa Bay quarterback Tom Brady throws a thirty-yard pass, which works to get them up to the goal line. Unfortunately, the Bucs can’t come up with any points on this one, leaving the game at 7-3, Tampa Bay. With seven left in the first half, the Chiefs almost got away with a much-needed interception, but a flag was called for holding which resulted in the play being overruled. The Chiefs yet again find themselves with another flag that hurts them. With their player offside, the Chiefs give the Bucs a chance to score, as the penalty turned it from a fourth down to a first down. This leads to the Buccaneers making a touchdown which brings the score to 14-3, Tampa Bay with six minutes left in the first half. With 2:07 on the clock, the Chiefs are less than twenty upwards from their goal. A touchdown here would leave it at 14-10, leaving the Buccaneers in the lead going into the halftime show. With just a minute left, the Kansas City Chiefs are unable to come up with any points on this last drive of their second quarter, forcing them to attempt a 34-yard field goal. It’s made, with just a 1:01 on the clock, bringing the score to 14-6, Tampa Bay. It’s like Deja vu, the Chiefs get themselves in another pinch with two flags that help the Tampa Bay Buccaneers get closer to their goal. With that, we see a score of 21-6, Tampa bay, going into the second half.

Back into the game in the third quarter, we see the Chiefs score a field goal and pick up 3 more points, bringing the overall score 21-9. From there, we don’t see much more movement on the scoreboard. Eleven minutes left in the third, we see the Bucs on the Chiefs 30-yard line as they struggle to gain more points to further their twelve-point lead. The drive brings us to eight minutes left, where Brady throws a beautiful throw to his revolver, making up about twenty yards. This opens the opportunity for a run by Leonard Fournette right into the end zone, picking up six points. The extra point is made, bringing the overall score 28-9, Tampa Bay. At six and a half minutes left in the third, the Bucs make a choice interception, giving them back the ball and putting them on their own forty-yard line. After a botched snap and a recovery by Brady, the Bucs were forced to make a 52-yard field goal. This brings the overall score to 31-9, leaving the Bucs in the lead. Nearing the end of the third, there’s penalties left and right for such team. With a minute left, Mahomes throws a pass to Hill for a first down, followed by another first down as they pick up some serious momentum and make long strides down the field. Unfortunately, that momentum is short lived with a missed pass right after. This brings about the end to the third quarter in Super Bowl LV, 31-9 Tampa Bay.

With some early momentum in the fourth, the Chiefs work their way to the end zone. An almost made touchdown, Mahomes is put in a tight spot as he struggles to find an open man. He lets loose the ball just as he falls, but it’s incomplete, leaving them on their thirteen-yard line, and forcing them to go for it on fourth and nine. They come up short when Mahomes is forced back about fifteen yards. He lets the ball fly towards the end zone, but it falls flat to the ground after being blocked by a Tampa defender. The ball is now turned over to Tampa Bay with fourteen left in the fourth, and the Bucs up 31-9. Seven minutes left, and an almost dangerous injury on Mahomes part, we’re watching the Chiefs make their way down the field as they sit on the fifty-yard line. Not long after, a fan decided to halt the game by streaking across the field, who then likely got tackled by security. Still no more progress on the scoreboard though. After an unnecessary taunt on the field by a Tampa Bay defender, the Chiefs picked up fifteen yards, bringing them closer to their goal. But each second that ticks by, the chances of Kansas winning this Super Bowl get smaller and smaller. The outcome is looking to be Tampa Bay as the victors for Super Bowl LV with four minutes left in the quarter. The Bucs have the ball now, as they try to hold onto their massive lead. After having to give up the ball, the Bucs are back on the defensive. With 2:38 on the clock, the Chiefs find themselves at their own twenty-five-yard line and struggling to get any closer to their goal. As the clock ticks closer to the 2-minute mark, the chiefs finally break the fifteen-yard barrier. They are facing a loss at Super Bowl LV. With a minute and a half, Devin White makes an interception in the end zone, closing out the night. Tampa Bay Buccaneers have won Super Bowl LV, the first time since 2002.