The Definitive Ranking of the Top 5 Kanye Songs 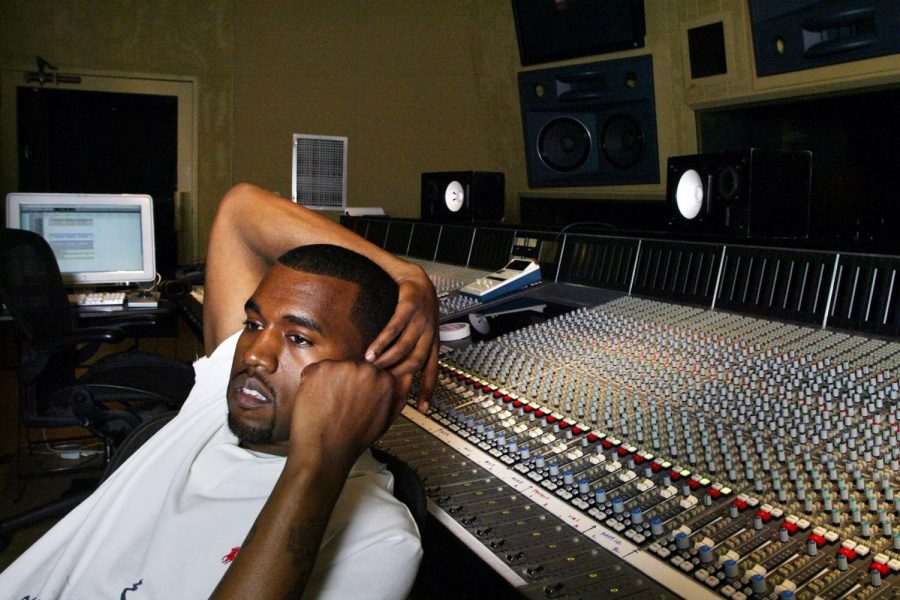 Sitting in the studio with an arm above his head, Kanye West looks in the distance. West has made many albums including, “My Beautiful Dark Twisted Fantasy”, “Ye”, “Life of Pablo” and more. Image courtesy of Rolling Stone.

Despite having a controversial past, Kanye West has made some of the greatest songs of all time. Before diving into Kanye’s music, I’ve usually perceived him as another man in the media, someone who is famous and has a celebrity family. However, after listening to many of his songs, I see that he has more depth than that. His music, especially the earlier songs of his, are so articulately written and produced.

As someone who doesn’t usually listen to rap and hip-hop, I was surprised that I genuinely liked his music. He has a way of turning a rap song into a melodic and smooth track. There are even songs I listen to acoustically since the background and supporting instruments speak a message even without words. That being said, here are some of my favorite Kanye songs and their definitive ranking.

Beginning with song No. 1, we have “Runaway.” This song is featured on his “My Beautiful Dark Twisted Fantasy” album. In most of Kanye’s songs, he speak-sings. This is usually him speaking the lyrics alongside the melody. But in this song, he actually uses his singing voice, which compliments the message of the song. It begins with a somber piano, allowing the beat to pick up and follow through.

When the chorus kicks in, he starts singing about tough days and how we always notice the negative people and things throughout them. The message in translation is to have a toast to these people and these negative events that occur to us and to just “Runaway,” hence the title of the song.

It soaks up your negative thoughts and transforms them in an upbeat and happy way. This song is great to listen to in the car, with friends and even alone in your room at night. The song is a whopping nine minutes long, however, the length of the song really amplifies the message. The longer you listen, the happier you become. Despite the negative things going on in your life, these nine minutes allow you to escape.

The start of the chorus begins with, “I’m so gifted at finding what I don’t like the most, So I think it’s time for us to have a toast.” Even if all you can focus on are the things stressing you out, we can be thankful that we are aware we don’t like these things, which gives us room to look for the things we do like. When we focus on being grateful and keep our energy high, we attract more of these positive things.

This song amplifies my emotions when I’m upset or feeling sad, but it always makes me do a 180 and flip the switch to my thinking. Instead of feeling upset about these things, I can be grateful for them happening, which makes me a stronger person. I can look back at these negative times, really self-reflect, and see how much I’ve grown because of these events.

The second-best Kanye song is “I Wonder.” This song comes off his 2007 “Graduation” album. The song begins with the lyrics, “Find your dreams come true.” It is supported by piano then gradually develops into a beat. This song is about being yourself and not letting anyone get in your way. If you commit to your dreams and who you want to be, you can really become that person.

Kanye is stereotyped for never smiling, which has gotten him attention in the media. This song, however, is so positive that you can’t help but be happy while listening to it. It brings a smile to my face and ultimately that seems like Kanye’s goal. His music is very uplifting and has positive messages all throughout. In “I Wonder,” he mentions other people making comments about his own livelihood. He challenges these people by saying that you can still be yourself and who you wish to become.

Despite the people around you judging you and being concerned with your life, you can still be independent and authentic. The more you listen to yourself and pay attention to what you truly want, the more prosperous you will become. More lines of the song include, “And I’m back on my grind,” “My name would help light up the Chicago skyline,” and “I’m a star, how could I not shine.” Thinking about Kanye’s success throughout the years shows that this type of mentality is what will get you places, and ultimately, line you up with your dreams.

The third song on my definitive ranking is “Waves.” This song is on the album “Life of Pablo.” This song is one of my favorites because of the instrumentals. It immediately begins with beats, background vocals and supporting lines by Chris Brown. This is a song I like to listen to in the car with my friends. It hypes you up, is easy to sing to, and brings your company together.

When the chorus begins, Chris Brown sings, “Waves don’t die.” There is a supporting beat in the back that make his vocals so unique and magnetic. As he says each word, the beat follows in the same key, something I’m highly fond of. It is so satisfying that you can’t help but to smile and sing along.

As the song progresses, Kanye sings more uplifting messages. This seems to be a theme of his in these songs, which is noticed by myself and others. He sings, “Sun don’t shine in the shade” and “Birds can’t fly in a cage.” This is saying that you can’t see your true potential when you’re setting yourself up for failure. If you were to open doors and give yourself more opportunities, you will feel and become more fulfilled.

The title of the song, “Waves” comes from the feeling of that fulfilment coming and going. However, Kanye means this wave may come and go, but those feelings of fulfilment are always there, Hence the lyric, “Waves don’t die.” The feeling is always attainable, it is just a matter of when you allow yourself to feel it. Whether this feeling comes from within or from the help of others, we always have the potential to feel amazing, we just have to open ourselves up and allow ourselves to grasp that feeling.

My fourth favorite Kanye song is “Ghost Town” which features on his “Ye” album. This is one of the first Kanye songs I listened to religiously. I first heard this song when I was in a rough patch. However, with the help of Kanye’s genius producing skills, I was able to pull myself out with this song. It features PARTYNEXTDOOR and Kid Cudi which are two other artists I like to listen to.

The song begins with a woman singing, then transitioning with a guitar into Kanye. It eventually goes into Kid Cudi singing, “I’ve been trying to make you love me, but everything I try just takes you further from me.” This introduces us to the idea that we want something that we cannot have. As the song continues, we hear Kanye being aware of some of his negative traits.

As we enter the middle of the song, the transition of guitars and the fast-paced background music sets you up for a ride. After the transition, the intensity of the song increases, and my favorite lines of the song begin. They are repeated many times, enhancing their significance. It starts off with, “Once again I am a child” and continues with, “I let go, of everything that I know, and nothing hurts anymore, I feel kind of free, we’re still the kids we used to be.”

Not only do the lyrics strike my emotions, but they sound so ethereal as they are sung. The words “free” and “be” are elongated in a way that allows you to truly feel the emotion embedded within the song. This part of the song made me realize that I’m young and have a full life to live ahead of me. It encouraged me to really let go and release my inner child. Not many things have to be serious, and it is more fun living life if you live in the moment.

Finalizing the list, coming in fifth place we have “Devil in a New Dress.” This song is on his “My Beautiful Dark Twisted Fantasy” album is one of my favorites to listen to with my friends. It begins with Kanye saying, “I loved it though, you know?” He breaks the line with a laugh, which I love. The media doesn’t see Kanye smiling and happy much of the time, however the laugh he placed into the song shows his playful side.

The next line of the song says, “Put your hands to the constellations.” I think it was very creative to word this phrase this way instead of the usual “Put your hands up to the sky.” Little gems like these carry his music in a way that makes him stand out. The rest of the song portrays Kanye’s perception of a woman. He makes references to God and religion, in order to describe her in a way that shows her devilish side.

Kanye makes the woman he’s referencing seem like an ex or an old fling. He attaches her to these negative traits but can’t seem to get over her. He repeats throughout the song, “The way you look should be a sin, you my sensation.” It shows that despite her devilishness, he can’t hold back.

The music supporting his vocals encourages a head-bop with its catchiness. In the middle, the tempo changes and allows for a piano and guitar duo. He does this frequently, singling out the instrumentals which really compliments each song. There’s a high-pitched voice that carries throughout the track, singing a form of lyrics that enhances the melody the song creates.

The message that I receive from this song is that it’s okay to love the things that aren’t necessarily good for us. We are attracted to many things and sometimes, it’s with the unfortunate fate that we can’t attain them. However, by loving and admiring something, we notice the value that we hold within ourselves. We have the power to feel so deeply for something, and with that knowledge, we can put our efforts into bigger and better things.

After analyzing and picking apart these songs, I hope that I’ve changed your perception of Kanye’s musical talent. I was once limited to hearing his older songs like “Gold Digger” and “Stronger” on the radio and thought that Kanye’s ability was capped at that. However, after hearing songs like the ones I’ve ranked, I see a whole new side of Kanye and what he feels. When really listening to the lyrics in these songs, we can learn to look at life so much differently. Kanye’s expertise has amazed me, and I can’t wait for more of his music in the future.