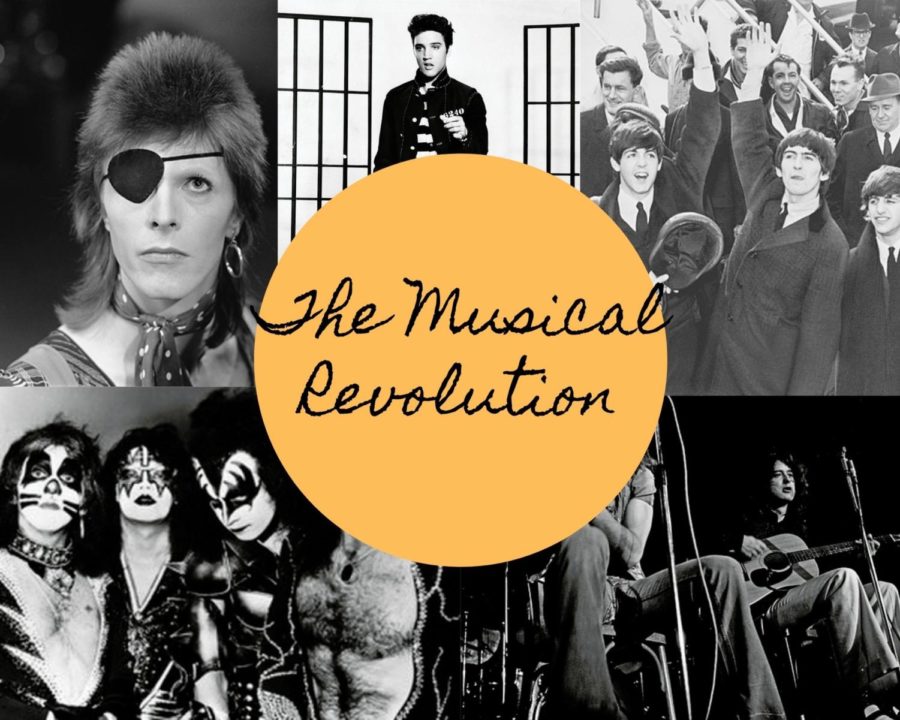 Influential artists pictured through the decades. The 50s, 60s, 70s, and 80s were some of the most musically influential periods of all time.

It is no secret that the artists of the ’50s, 60s, ’70s, and ’80s rolled out some of the most iconic and influential musical pieces in history.

The 50s shocked the nation with all the fresh beats and the Bee-Bop tunes. Teens worldwide were getting used to the idea of a new sound, Rock n’ Roll and rhythm and blues. Number one hits like “Ain’t That A Shame,” “Don’t Be Cruel,” and “You Send Me” were playing on jukeboxes in diners all over the country. Creativity and innovation were crucial elements to the new wave of sound rushing in.

The ’60s were full of diversity. In the early ’60s, society was still making progress with civil rights, and the country was urging people to have a new outlook on life. President Kennedy’s assassination brought on much fear, and the Vietnam War was a stressor moreover. Nevertheless, there were still restless minds out there pursuing their talent and bringing joy and happiness through the expression of music. The British Invasion, R&B, and Motown were perfect examples. If you were to ask any American from that era, they would tell you they remember seeing the Beatles arriving in America for the first time. It was an unforgettable moment for so many people. Do not be fooled though; Psychedelic rock was making its mark as well. It just came in the latter half of the era. Some people used mind-altering substances like LSD, and lots of times, this music would be the inspiration behind it. At the time, artists introduced fresh styles and genres. However, even though tons of distinctive styles came into play, the ones named above were the most prevalent.

The ’70s had no boundaries regarding music, style, or attitude. The Vietnam War was angering many groups of people, Nixon was scandalous, and the sexual revolution was prowling. Instead of fear generating in people, there was peace, love, and serenity. With this carefree mindset, there was unlimited divergence when it came to music. There was Heavy Metal, Disco, and Glam/Punk rock. One of the most influential groups that had one of the most considerable impacts on the ’70s was Led Zeppelin because of their originality and exceptional equal amounts of talent. The band was a powerhouse, full of energy and euphoric qualities. On the other side of that coin, many artists like KC and The Sunshine Band, Bee Gees, and Earth, Wind, and Fire encouraged young folks to get down and boogie on the dance floor. Glam rock was catering to all the misfits that did not belong. David Bowie was the poster child of this genre of music. He practically invented it. With songs like “Rebel, Rebel and Life on Mars?” Teenagers and adults alike embraced this weirdness and eccentricity.

In the 80s, everything flip switched so quickly. Music was becoming even more computerized because of a wave of new technological advances. Techno became big, although rock and heavy metal were still developing and getting wilder and crazier. Nobody left the house without hair spray, and everybody included neon with every outfit, and the louder the music got, the better. MTV became the central musical platform that would reach millions of kids all around the world through television. Some of the most memorable artists of the time were the Eurythmics, Soft Cell, and The Human League. It was a sound that was alien-like and foreign. Thanks to the use of computers and programming, robotically enhanced sounds were made possible. However, there were still other bands forming that were creating their sound using inspiration from previous eras. For example, the glam/punk rock phase inspired bands like Motley Crue and Kiss. They just happened to have enough charisma to make their band work. The ’80s were significantly different from the past decades and can compare to the music sounds produced now.

Decades later, we are still creating and producing music that has evolved from the past. The past being Elvis’s breakthrough Rock n’ Roll moment, the 60s psychedelic sound, the 70s free love attitude and the 80s hyper movement. It is hard to do justice to the number of artists and bands contributing to the musical past. There have been so many iconic figures that have left a unique influence. However, every piece of music has its spot in history. And it will remain there and serve as inspiration for the next, new talent.

“I love older music! I think it has a lot more meaning and can be a lot more complex than the music of today. I feel it has a lot of raw emotion and makes me very nostalgic,” Sally Walser said.

Sydney Best, a junior, also appreciates music from the past.

“Listening to oldies, whether it is 70s rock, 80s pop or 90s R and B is so fun to do because it lets you enjoy the same music that people from other generations got to enjoy.” Sydney Best said.

To see some of the most iconic music moments in history: