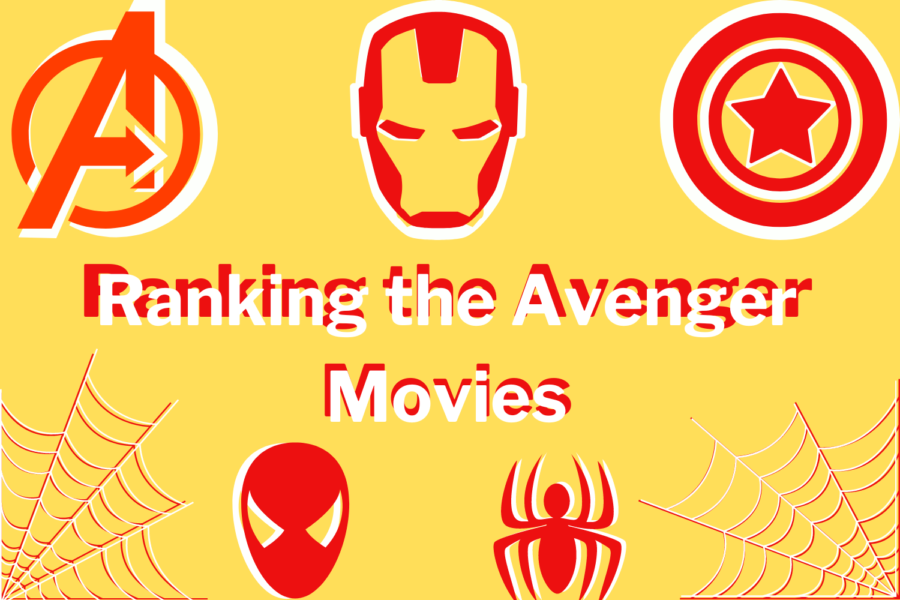 MARVEL movies throughout the years have become increasingly popular. One of the many reasons is the group of superheroes called the Avengers; these movies have brought in over $5.5 billion for the MARVEL industry.

MARVEL is one of the most successful movie franchises of the modern era. The MARVEL universe focuses on superheroes, for example, Iron Man, Thor, Captain America, Black Widow, Hawkeye, and Hulk. All the characters mentioned are The Avengers: a group of heroes assembled by Nick Fury to fight off the evil that is too powerful for the world to defend itself against.
#1 The Avengers
This is the first Avenger movie and the introduction to many of the characters like Hawkeye and Hulk, who audiences have never seen before this film; however, some heroes like Iron Man and Captain America have already been in their own movies, which means the viewers were familiar with them before the Avengers made their debut. In The Avengers, Nick Fury, the head of S.H.I.E.L.D (an intelligence organization), brings together a group of individuals, each with unique abilities; for example, Black Widow is a master assassin, the Hulk has super strength, and Thor is the God of Thunder. They are united to fight against the main villain in this movie- Loki. What makes this movie superior to the rest is the fact that throughout the plot, audiences get to see the members of the Avengers fighting amongst themselves instead of working to defeat Loki. I think this is important because it shows that they aren’t a group that worked perfectly together from the beginning; they had a rocky start and persevered to become the amazing team they are at the end of the movie.
#2 Avengers Endgame
The duration of this movie, the Avengers, with a couple of added members like the Guardians of the Galaxy and Black Panther, are united once again to defeat Thanos, who wants to destroy all life forms in the universe by using the 6 Infinity Stones. What makes this movie enjoyable is the time travel aspect. For example, when present Captain America fights past Captain America, and when present Captain America wins, he says the famous line, “That is America’s ass.” However, this movie is not #1 on the list because all the best characters die by the end of the film. My two favorite characters- Iron Man and Black Widow- both sacrifice themselves to defeat Thanos in the end. While the Avengers did win, MARVEL should have chosen worse characters to kill off, like Nebula (Gamora’s sister).
#3 Avengers Infinity War
The majority of Infinity War is the Avengers trying to prevent Thanos from collecting all 6 Infinity Stones because if he does, he will gain the ability to kill half of the population of every planet with just a snap of his fingers. There are many deaths throughout the course of the movie; for example, Thanos kills Gamora on Vormir, and once he snaps his fingers at the end of the film, the following Avengers turn to dust Spiderman, Bucky, Doctor Strange, Scarlet Witch, and many more. This film is very well thought out and has audiences on the edge of their seats throughout the plot. It is ranked #3 because although it is very enticing, there are few happy moments in this movie. In comparison, other MARVEL movies incorporate many funny scenes into the story. Senior Olivia Bagulho states, “My favorite Avengers movie is Infinity War because it involves all the characters, and I felt like the battle scenes were all very elaborate. Tony Stark also didn’t die yet, so I wasn’t that sad.”
#4 Avengers Age of Ultron
Age of Ultron is one of the most lighthearted of any of the Avenger films because the group is united the whole movie against a common goal which is rare, and they are just trying to defeat an intelligent robot which is less intense compared to Thanos trying to kill half of all populations. This film is one of my least favorites because of the writers trying to make Natasha (Black Widow) and Bruce (The Hulk) a couple. Throughout the movie, Bruce repeatedly turns Natasha down, making her look like she has no dignity or pride. I found it honestly cringy to watch as she keeps trying to light a spark between the two of them, and it fails every single time. This movie does have many funny scenes, like when Captain America says “language” as a reaction to Tony’s cursing during a fight scene. We also get to see Hawkeye’s family, which he had managed to keep under wraps from everyone on the team.
#5 Avenger Civil War
In this movie, the Avengers split up into two teams. One team is in agreeance with Iron Man. The other is Captain America. They are fighting over whether the Avengers should have a governing body above them to keep them in check so they can reduce the amount of destruction caused in their fights when they occur. In agreeing to this, Captain’s best friend Bucky Barnes would have to be in custody because he was psychologically manipulated to become a trained killer named the Winter Solider. If every Avenger does not sign the contract, the group will cease to exist. Iron Man’s team signs it immediately; however, Captain America’s team fights the new changes that would happen and refuses to sign. This causes all the fighting, and in the end, most of Captain America’s team ends up in jail. I dislike this movie the most because, as stated before, I enjoy when the Avengers are acting as a team, and this movie is based on them arguing and fighting amongst themselves. While it is entertaining to see which side everyone chooses, I like when they are all on the same page.

In conclusion, all the Avengers movies are well written, but some are better than others for many different aspects of the films. What makes these movies so enjoyable are the characters; MARVEL does a fantastic job building every character with such detail that audiences can’t help but be emotionally attached to all of them, which is why MARVEL is one of the fastest growing franchises today.