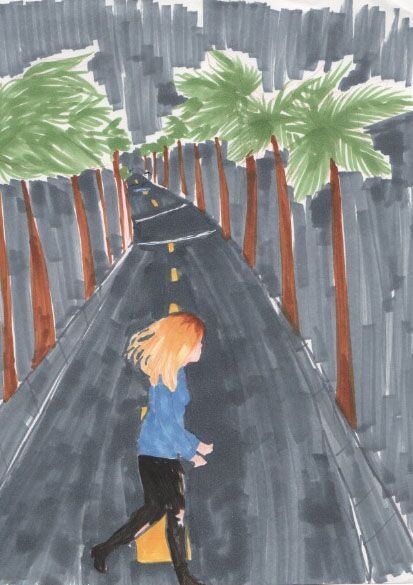 The city lights and background noise of Los Angeles were a lot less charming than Jody remembered. She wondered if it was because of the events that’d happened there, or whether it was just Jody’s crippling anxiety she had developed during her junior and senior year. Nonetheless, the city of angels was rather underwhelming to Jody, the opposite of what it had been when she had lived there several years back. She was almost positive all of her old friends were gone and moved out by now, as they all — including herself — were nearing the unfortunate age of 21 quite rapidly. It was a shame that she was back here, she figured, instead of far, far away like the people she might have once cared about. She supposed it was almost too metaphorical to be true.

To Jody, travelling the 24 miles up I-110 was more of a chore than it needed to be. People tended to gravitate towards Los Angeles if they aspired to become famous or something of the like, but to Jody, having to go back to her hometown was just a means of making fake amends that didn’t exist. To Jody, Los Angeles only harbored the infamous, the daydreamers and her own repressed memories. San Pedro, the quiet shoreline town that nobody seemed to know even existed at all, was preferred by Jody. That was where she resided for most of the time, for nine out of 12 months, the other three being swallowed up whole by the monster that was the city of Los Angeles. In case it wasn’t painstakingly obvious, Jody dreaded the three months she had off from college, and even more so she dreaded the feeling of being an outsider that engulfed her once she entered the city limits.

Nonchalantly, Jody slammed the door of her red Jeep Wrangler shut and ventured out into the middle of the street. She told herself it was okay if she jaywalked, because the drivers always had to yield to pedestrians and, plus, cops tended to never pay attention there anyways. Turning a blind eye to the honking of oncoming traffic, Jody hopped onto the curb and headed down the hideously familiar road to the hotel she’d stayed at so many times before when visiting her best friend, Marceline Lombardi.

Definitely the worst thing of all about Los Angeles was the fact that Marceline lived there and not in San Pedro. That, and having to take off from all three of her low-paying, part-time jobs to come visit the person she treasured most out of everyone. She wondered sometimes if her bosses just thought she was lazy, or if when she got back, they’d cut her hours out of spite; sometimes they did, and sometimes it made Jody have breakdowns in the back corners of her already cluttered mind. Coupled with piles of summer assignments and missed calls from her “friends” and missed texts from her Mom …

Jody misjudged the distance between her Doc Martens and the curb, tripped and scraped both of her knees and hands in a bloody and ungraceful collision. She cried in public for the first time since her overly emo sophomore year, where a presentation didn’t go as well as she had hoped. Her tears tasted salty, she noted. It would perhaps make a funny story to recite later, with a bitter background sense of nihilism. Jody wondered if her managers would beat down on her

later for having such unsightly scars on her knees. Jody wondered if Marceline would pay any mind. Maybe it was narcissistic of Jody to hope that she would.

The lazy days that followed in Jody’s arrival came too slow and ended too soon, much to her chagrin. Soon enough, she was getting emails from coworkers and professors and letting the work pile up just like her Mom had always berated her for doing so. After all her mother had always gotten straight As, what excuse was it for Jody not to do the same? Skipped classes, mounds of schoolwork and parents lashing out at her were all Jody foresaw in her future, and the thought made her sick to her stomach with envy for her younger self. Stress so intense she’d vomit; breaks didn’t come easy to Jody, did they? She wished she had taken more advantage of her life, but instead, she had let herself turn into a stereotypical “gifted kid burnout”. Self-inflicted and self-assured bruises, a sense of sickening nostalgia, and one charming, half-Italian socialite girl were the only things keeping Jody afloat.

Learning to like Los Angeles was difficult for Jody, but it wasn’t impossible. Small vegan cafes with charm — finally, a menu she could order anything off of! — and ridiculously large outlet malls — despite her being face first in student debt — seemed to make summer okay for Jody, which was delightfully unexpected. Schoolwork and shift schedules released every Tuesday still haunted her though. She knew it was temporary. She knew she’d go back to San Pedro.

She discovered her favorite restaurant was the production of a chain of restaurants, the particular one being just west of Beverly Hills. It was funny to her that San Pedro and Los Angeles weren’t so different as she thought they were. Life moved in slow motion in Los Angeles. Life still moved in slow motion in San Pedro, it was just slightly less stress-inducing being in a place she knew with people she didn’t. A part of her in the back of her thoughts missed San Pedro, but she knew more that she’d miss the joy of ditching the familiarity of the hotel and instead staying with Marceline, hugging her close and watching cheesy horror movies. It was suicide to want to go back to back to San Pedro.

It was suicide to stay away, though.

“How do you think things ended up this way?” Jody whispered, staring with tear-filled bug-eyes at the dull and fading paint of the city street. She turned her head to Marceline, who only opened and closed her mouth several times before puttering out a half attempt at a reply.

“You jaywalked, and we almost hit you.”

Jody scoffed and looked away. Creativity and free thinking were difficult when they’d both been stripped of their youth and free time. She wiped a hand across her face to stop her tears and snot, wishing she had halted their ever-speeding lives in such a manner. “There are stranger ways to meet someone,” Marceline reckoned, scratching the back of her head absentmindedly. After a moment’s thought, Jody nodded, and wondered what would had happened if Marceline had ended up hitting her. She honestly didn’t know if that would have been better or worse for her.

Stress so intense she’d vomit; breaks didn’t come easy to Jody, did they?

The city lights and background noise of a slightly more charming Los Angeles faded out around them.

“Will you ever get out of there?”