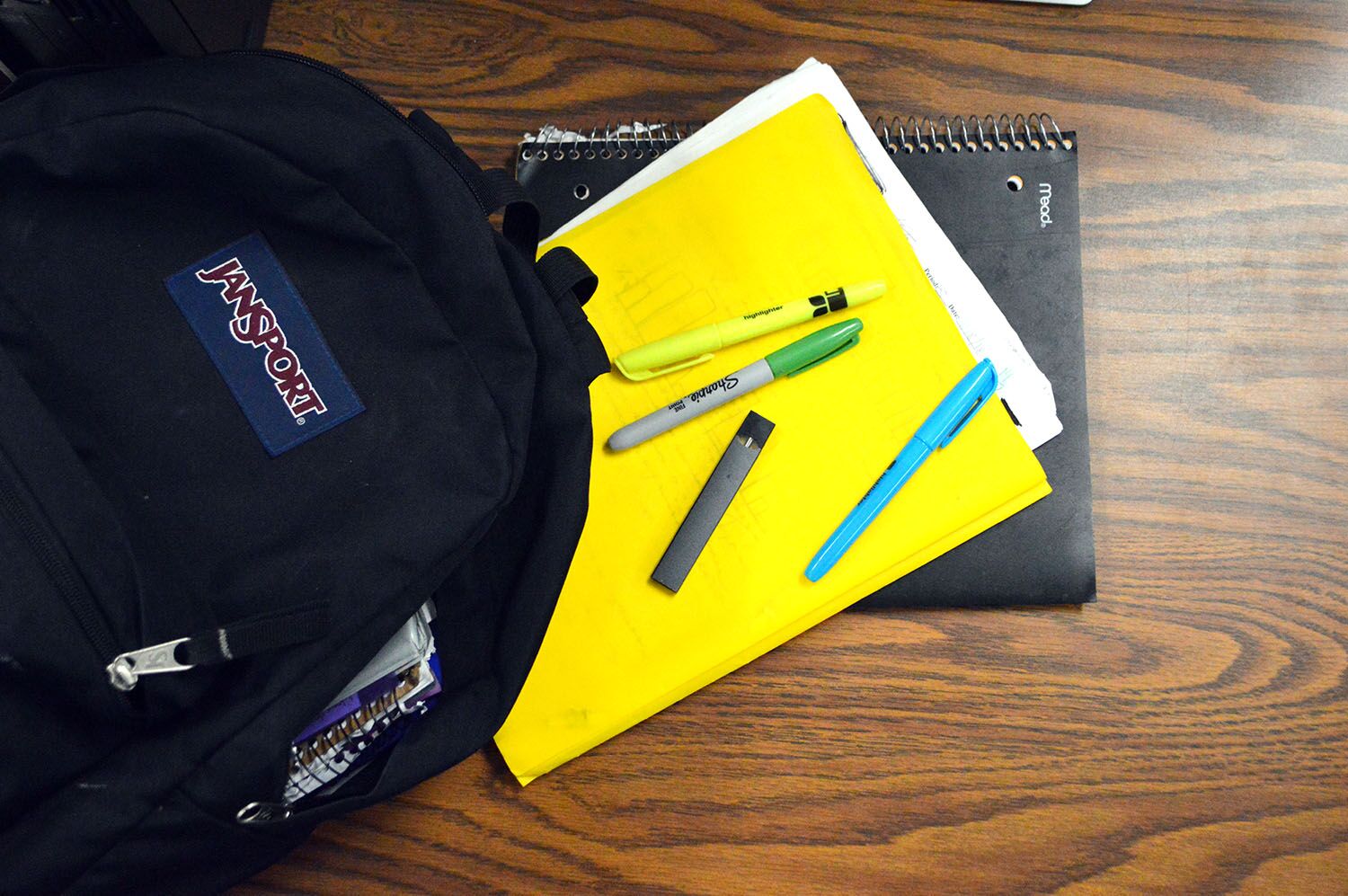 Nationally, the Food and Drug Administration reports that e-cigarette use has increased 78 percent in high schools from 2017 to 2018, and 48 percent among middle schools for the same time range. The FDA implemented a national advertisement campaign designed to influence teens to avoid e-cigarettes by using social media-based tactics, such as YouTube ads aimed at adolescents aged 12 to 17. (Alea Jennings)

Nationally, the Food and Drug Administration reports that e-cigarette use has increased 78 percent in high schools from 2017 to 2018, and 48 percent among middle schools for the same time range. The FDA implemented a national advertisement campaign designed to influence teens to avoid e-cigarettes by using social media-based tactics, such as YouTube ads aimed at adolescents aged 12 to 17.

Nationally, the Food and Drug Administration reports that e-cigarette use has increased 78 percent in high schools from 2017 to 2018, and 48 percent among middle schools for the same time range.

“A lot of the middle schoolers are getting involved, which carries over into high school,” Holloway said. “It’s not just Plant, it’s everywhere. Not just in this city. It’s everywhere.”

The Food and Drug Administration is now working to regulate the use of vapes and e-liquids, which is the fluid found in vapes that often contains nicotine. The FDA has now implemented a national advertisement campaign designed to influence teens to avoid e-cigarettes by using social media-based tactics, such as YouTube ads aimed at adolescents aged 12 to 17.

The FDA is also trying to prevent companies like JUUL from marketing their products to teens via use of “kid-friendly” flavors, such as mango and bubblegum. Warning letters and penalty fines were distributed in September to companies who illegally sold vape products to minors.

Youth in 2015 who used an e-cigarette in the past 30 days who also used another tobacco product in the same time frame: 65.2%

Teens who incorrectly reported e-cigarettes as being compromised of mostly flavoring: 60%

63% of Juul users did not know it contains nicotine

Use of e-cigarettes in middle school:

Use of cigarettes in high school:

Assistant principal Napoleon Wade said that the administration is doing everything it can to prevent vaping, such as having teachers go into student bathrooms, and that teachers are also trying to be more conscious of what students are doing in class.

“The kids become more and more … clever to try and hide things,” Wade said. “You can have kids going into bathroom stalls together … just to get a buzz off of something. They’re willing to risk their whole reputation just to get a buzz that lasts maybe an hour.”

Wade also noted that, in his experience, he’s seen that students who vape with nicotine products are more likely to try different, harder substances.

“Now students have gone from vaping, using tobacco and nicotine products,” Wade said. “They’re now, most times, trying other drugs like marijuana and then prescription drugs.”

Wade also said that he believes students should try to consider the effects that their actions have on the people around them.

“Kids need to understand that they shouldn’t cause stress to people, and that’s what they’re doing,” Wade said. “We have more things to do than run into the bathrooms all day long.”

The legal consequences of vaping vary based upon the number of offenses and the contents the vape contains.

Officer Mark Holloway said that students who are seen vaping on campus are required to fulfill a smoking program that costs $30 and another class that is $15 if the vape contains tobacco only. In the courses, students learn about the effects of tobacco, but a first offense will not go on a permanent record unless the student already has a prior offense.

If the student commits a second offense with a tobacco vape, consequences escalate to fines and possible license suspension according to Holloway.

Although not a school policy, some coaches have implemented rules removing athletes who vape under the legal age limit.

“Students being kicked off is not a rule that the school had,” principal Johnny Bush said. “The coach controls the team, and if the coach makes it known upfront that that will not be accepted and will not be tolerated, I don’t tell the coach how to coach their team or run their team.”

“All we can do is try to prevent them from getting onto campus,” Holloway said. “It’s just up to the students to govern themselves accordingly and show some respect.”

According to adolescent health specialist Jasmine Reese, the receptors in a developing adolescent’s brain handle nicotine and tobacco products in harmful ways.

“One of the things nicotine does is that it looks very similar to your brain’s natural chemicals and it can bind to the receptors … and make your brain want more of that unnatural substance,” Reese said.

Reese also discussed the fact that many teens believe that vaping has none of the same health risks as smoking traditional cigarettes.

“We are learning now that there are a lot of similarities,” Reese said. “We don’t know what’s in each of these vapes, but in a lot of them we’ve been finding substances that are very harmful to health.”

Reese said that along with cancer-causing substances being discovered in vapes, metals such as nickel and tin are present in refined particles that can travel to lungs and cause long-term breathing problems.

Along with respiratory issues, the American Heart Association reported in a 2017 medical journal that e-cigarette use is connected to the development of cardiovascular disease, although effects are less pronounced than traditional cigarettes.

“The vaping product hasn’t been very well controlled, so one of the main dangers is that we don’t know what’s in all of these solutions and things that are sold,” Reese said.

As more people become aware of teen drug usage, administrators and school officials want students to be aware of ways they can seek help.

“We definitely try to be a liaison with whatever the treatment options or if they need counseling or rehab, depending on the severity of the situation,” said Leland Schardt, school social worker. “We are here to support.”

Assistant Principal Napolean Wade said that the school’s approach to drug-related issues has changed since former student Katie Golden passed away of heroin overdose in 2017.

“We’ve extended it to the guidance counselors, the teachers and the administrative staff to be more open and accepting to students coming to them, and then talking to the students about this whole snitching police, because that’s what kids are abiding by these days,” Wade said.

Golden’s mother Dawn shared her story at this year’s Narcotics Overdose and Prevention Education presentation given to sophomores to teach consequences of drug usage.

Principal Johnny Bush said that it is difficult to completely crack down on drug use in schools.

“What we are relying on is for people be good role models,” Bush said. “I think the most powerful tool that we have is the tool of kids doing the right thing.”

Joseph Perno, a doctor at the All Children’s pediatric ER, noted some problems with the current state of care for teen drug abuse.

“There’s probably more that could be done,” Perno said. “I don’t feel comfortable from that aspect of finding appropriate resources for people because they’re just not out there.”

Perno said he sees kids come into the emergency room for drug related issues that are typically not a chronic substance abuse problem, but rather related to recreational use.

“You always run the risk of overdose with drug use, and especially problems resulting from decreased awareness in a drugged state.” Perno said.

WHO TO TALK TO

Connect Mentoring Program– 50 adult mentors available for one on one aid for teenagers. Students must be recommended for the program by a guidance counselor, social worker, school psychologist or teachers.

Despite stigma that students struggling with mental health issues have no one to turn to, resources are available for student health both at the school and professional level.

At the school level, social worker Leland Schardt and school psychologist Jim Landers are on-campus, free resources for all students. Along with in person support, students can seek help anonymously and over the phone by calling 211, a referral service that can be used during immediate crisis or to find more information.

“Sometimes kids come to us, sometimes parents come to us, sometimes friends come to us and say we are really concerned about someone,” Landers said. “Often times though, kids come to us with one problem, like schoolwork or feeling stressed out, and then these other pieces of the puzzle come into play. As we look at how we can help this piece, we learn about other pieces of the puzzle, so we try to help them with all those pieces to settle the lines back down to let them have a little more control.”

Professionally, according to the medical director of psychiatry at John’s Hopkins All Children’s Hospital, Mark Cavitt, there are many different types of support for adolescents. Cavitt recommends considering only evidence-based therapies, such as Cognitive Behavioral Therapy, most appropriate for anxiety disorders, Dialectical Behavioral Therapy, used for mood regulation, and Interpersonal therapy, proven to treat depression.

Along with therapies, FDA-approved psychotropic medicines are available to be used in conjunction with therapies. Despite stigmas, medicines and counseling are typically on time-limited models that aim to stabilize symptoms of the disorder, Cavitt said.

“I think the other myth about psychotropic meds is that they somehow fundamentally change the people on, what their personalities are like,” Cavitt said. “The medications don’t make you somebody else.  I would argue that they simply help you be yourself without anxiety, without depression, without psychosis. They don’t change one’s fundamental personality or being.”

Cavitt recommends seeking help if symptoms are repeatedly interfering with life functions, such as maintaining friendships, in different settings.

“We all have anxiety, we should all have anxiety because that’s functional and normal,” Cavitt said. “But when you have too much anxiety that it interferes with function, then that may be the key sign that it’s time to get some help.”

10 million new STDs reported each year that were among young people ages 15 to 24.

Hillsborough is one of 15 counties that has adopted a health policy that includes a comprehensive reproductive and sexual health education curriculum, according to the Florida Department of Education.

Although it is abstinence-based, the curriculum includes discussion of prevention methods but focuses on promoting abstinence as the only complete guarantee to avoid STDs and pregnancy.

According to More Health representative Jeanne Rowe, the safest form of sex involves dual protection, typically in the form of a condom and birth control.

“What I think happens is if parent hears ‘safe sex’, and I know I’ve felt the same way as a parent, what they think is we’re saying it’s okay, and that’s not what we’re saying,” Rowe, who has been working at More Health for 17 years, said. “We’re saying abstinence is the only 100 percent guarantee but if someone is not gonna wait, then we need to look at safe sex.”

“So that’s a little bit alarming,” Mahon said. “It’s one of those deals where I think most teenagers feel like it’s a subcategory that won’t affect them, but actually teenagers that are contracting HIV is really on the rise.”

Among teens, the most common STD is chlamydia, which causes infertility but is curable with an antibiotic.  70 percent of people with chlamydia don’t experience any symptoms, Rowe said.

“Someone that has sexual activity, they need to be tested once a year because they might not have symptoms,” Rowe said. “It’s very possible they could have an STD if they’ve been sexually active.”

If you want a picture to show with your comment, go get a gravatar.