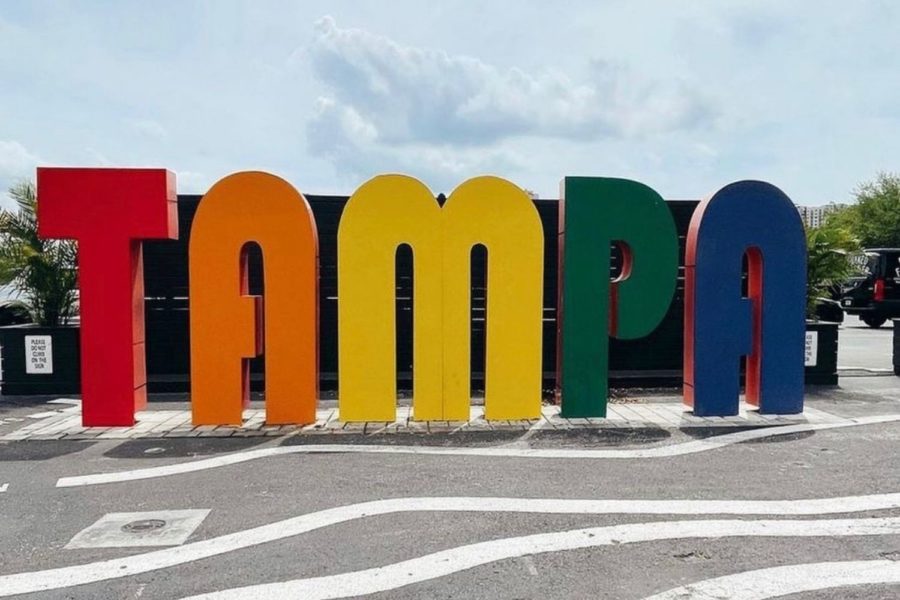 The Tampa sign in Sparkman Wharf is rainbow for the Tampa Pride Parade. Amid the “Don’t Say Gay Bill” controversy, the Ybor City parade was held on March 26.

The Parental Rights in Education Bill, coined by critics as the “Don’t Say Gay Bill,” is generating nationwide ridicule of Florida’s leadership, and is drawing strong disapproval from Plant’s LGBTQ+ students and their supporters.

“I’m against the law because of the way it’ll affect future generations,” Freshman Carmen Rivera said. “People might think it’s protecting kids but in reality, it’s teaching queer kids that they have to hide and can’t be themselves around others.”

Critics are specifically upset with one line of the bill that “prohibits classroom discussion about sexual orientation or gender identity in certain grade levels.” Supporters of the bill say it encourages more parental say in their children’s education.

Since the Florida House passed the bill on Feb. 24, many Floridians have been infuriated. After the Florida Senate passed the bill on March 8, Florida governor Ron DeSantis signed it into law on March 28, outraging the LGBTQ+ community. Across Florida, students have demonstrated walkouts, and cities have staged rallies to protest the bill. Even The Walt Disney Co., one of Florida’s largest and most powerful employers, and its Chief Executive Officer have strongly condemned the measure.

Tampa held its own annual pride parade in Ybor City on March 26. It was just as much of a pride parade as a protest of the bill. With T-shirts saying, “It’s OK to say gay” and posters reading, “Won’t be erased by DeSantis,” attendees expressed disdain for the “Don’t Say Gay Bill.”

Many Plant students are troubled by the passing of the bill. Sofia Carballo, a sophomore, says she feels strongly about protecting LGBTQ+ youth.

“I don’t support the bill because it deeply affects how young children view gay relationships when they’re older and can make them see it as a bad thing, possibly repressing themselves in the process,” Carballo said. “It’s important to share stories of gay people in history and normalize it to make a more inclusive and open world where everyone is accepted, and that starts at a young age. This bill is a representation of cowardice from Florida’s government and should not have been signed into law.”

The controversy has amassed national attention, including at this year’s Academy Awards ceremony, where the hosts called out Florida during the show. Comedian Wanda Sykes said, “We’re going to have a great night tonight, and for you people in Florida, we’re going to have a gay night.” Then, the three hosts: Sykes, Amy Schumer and Regina Hall repeated “gay” several times. Despite these comments at the Oscars, Gov. DeSantis was adamant on the passing of the measure.

“We don’t send kids to school so the schools can raise our kids,” Rubio said in the interview. “We send them so they can teach them; raising kids are the job of parents and families, not schools.”

Plant Sophomore Kara Hubbard disagrees with the Senator. She believes that the bill discourages acceptance by prohibiting genuine conversations.

“I think it is detrimental for our society not to encourage acceptance at the earliest age possible,” Hubbard said. “I am absolutely against it [the bill]. My father is a teacher and feels strongly that any measure to prevent honest conversation is hurtful to our community and our nation.”

@TampaPride members of @equalityfl march with a sign that reads ‘Won’t Be Erased by DeSantis’ as “We Say Gay” chants roar.